Norway took first place with a total of 37 medals

Fireworks reading “One World” and “One Family” were launched over the stadium during the ceremony in Bejing.

The message contrasted with the reality that many countries — including the United States, Australia, New Zealand, Austria, Belgium, Denmark, Estonia, Japan, Sweden, Slovenia, Lituania, the Netherlands and the United Kingdom — all refused to send officials and delegates to the games. The boycotts were sparked after China came under international condemnation following several high-profile scandals.

Some countries cited the human rights violation China is accused of carrying out against the minority Uyghur Muslim community. Others took issue with the communist government’s treatment of tennis star Peng Shuai, who disappeared for a period after she accused Communist Party officials of sexual assault. She reappeared at the Olympics and denied making the accusation during an interview.

Some countries did not send representatives to Beijing because of concerns over the COVID-19 pandemic.

Chinese Olympics officials created an elaborate “bubble” to maintain the country’s “zero COVID” policy and limit participants’ exposure to COVID surges in the rest of the country.

Athletes and officials arriving for the games had to provide negative COVID-19 tests, stay within the secured Olympic Village, and remain segregated from the nation’s general population.

Organizers ultimately reported there were just over 430 cases of COVID-19 detected at the Winter Olympics. Of these, 185 cases were among athletes or team officials while 252 cases were found in “stakeholders,” per DPA.

“During the course of the Games, more than 1.8 million tests were carried out within the closed loop, with another 14,000 tests on arrival at Beijing Airport,” the outlet reported.

Isolation and limited exposure were thematic to this year’s games, as China ended ticket sales in January. Only a few spectators were permitted entry to certain events by invitation only.

“This announcement follows the release of pandemic prevention and control policy principles for the Olympic and Paralympic Winter Games Beijing 2022 on 29 September 2021,” the International Olympic Committee said in a statement at the time, citing the coronavirus pandemic.

NBC also cited COVID-19 when the network announced it would run the majority of its broadcasting operations from its American headquarters in Stamford, Connecticut.

“Something significant has changed virtually every day for the last three months, forcing us to adjust our plan numerous times,” said Molly Solomon, the head of NBC’s Olympics production unit, in the late-January announcement. “And I expect that to continue as well as the challenge of doing the Olympics.”

The prediction ultimately proved to be true for the media. A Dutch reporter was filmed being dragged away by Chinese security forces while reporting on the event.

Unlike the Tokyo Summer Olympics in 2021, the games were not widely documented on social media.

Olympic athletes were discouraged from bringing personal devices to the games due to concerns about Chinese cyber surveillance.

In a bulletin to athletes, Team USA recommended the use of “burner phones” and disposable computers while in Beijing.

“Personal information collected by Beijing 2022 will not be disclosed unless the disclosure is necessary,” said the Beijing 2022 organizing committee in a statement ahead of the games. “Information of accredited media representatives will only be used for purposes related to the Olympic and Paralympic Winter Games.”

Speaker of the House Nancy Pelosi warned Americans at the Games not to speak out against the Chinese Communist Party.

“I would say to our athletes, ‘You’re there to compete. Do not risk incurring the anger of the Chinese government, because they are ruthless,’” Pelosi said on Feb. 3.

“I know there is the temptation on the part of some to speak out while they are there,” she added. “I respect that. But I also worry about what the Chinese government might do to their reputations, to their families.”

By the end of the Game’s two-week run, Norway took first place with the most medals. This includes 16 gold medals, 8 silver, and 13 bronze. The Russian Olympic Committee placed second and Germany took third. 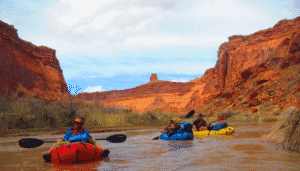