A mandate issued by the Biden administration requiring outdoor recreation companies that operate on public land to pay a minimum wage of $15 per hour was halted following an appellate court’s ruling.

The U.S. Court of Appeals for the Tenth Circuit granted an injunction request filed by the Pacific Legal Foundation, which represents a group of outdoor recreational groups that have contractual operations agreements with the U.S. government.

The companies have argued that the cost of the increased wages could damage their business and ultimately cause their closure.

The Denver court ruled on Feb. 17 that the groups “have demonstrated an entitlement to relief from the minimum wage order in their particular circumstances.”

In his decision, U.S. Circuit Judge Gregory Phillips wrote that the plaintiffs were “likely to succeed on the merits” and could “suffer irreparable harm in the absence of preliminary relief.”

The U.S. Department of Labor is prohibited from enforcing the minimum wage mandate.

The department issued the wage rule in November of 2021 following an executive order from President Biden. In a statement, the DOL said the increased hourly pay “enhances worker productivity and generates higher-quality work by boosting workers’ health, morale, and effort; reducing absenteeism and turnover; and lowering supervisory and training costs.”

All recreation companies with a special land use permit to operate on federal lands issued by the U.S. Forest Service and Bureau of Land Management were required to meet the new wage standard.

In a statement following the court’s ruling, Pacific Legal Foundation attorney Caleb Kruckenberg said, “The court recognized that this wage rule doesn’t make sense for the industry, would limit access to the outdoors, and would reduce employment opportunities for people in the industry.”

“More importantly, the court also recognized that the President did not have the authority to issue the rule,” he added.

The Pacific Legal Foundation filed legal action against the Biden administration in December. In January, a federal judge dismissed the lawsuit and upheld Biden’s executive order.

“Plaintiffs have not shown a likelihood that they ultimately will establish that the Biden rule is arbitrary and capricious,” wrote Chief Judge Philip Brimmer of the U.S. District of Colorado. 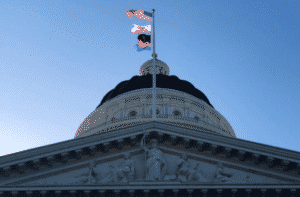