U.S. athletes have been told they will not be permitted to bring their personal phones

The International Olympic Committee announced tickets for the upcoming Winter Olympics in Beijing will no longer be sold to the general public.

The announcement follows the first reported case of the omicron variant of COVID-19 being documented in the nation’s capital.

“Given the current situation of the COVID-19 pandemic, in order to ensure the safety of all participants and spectators, it has been decided that tickets should not be sold anymore but be part of an adapted programme that will invite groups of spectators to be present on site during the Games,” the IOC said in a statement on Jan.17.

“This announcement follows the release of pandemic prevention and control policy principles for the Olympic and Paralympic Winter Games Beijing 2022 on 29 September 2021,” the organization added. “One of the principles was that no tickets would be sold to spectators from outside China’s mainland, and that tickets would be sold exclusively to spectators residing in China’s mainland who meet the requirements of COVID-19 countermeasures.”

The IOC has not revealed how many spectators would be invited to watch the games or how it would determine who would receive an invitation. The governing body has not said if spectators will be required to quarantine ahead of the event.

Beijing currently requires those traveling outside the city to present a negative COVID-19 test before reentering the city, as well as a follow-up a few days later.

Residents have been discouraged from leaving the city for the upcoming Lunar New Year holiday.

They have also been warned by officials to “avoid buying goods from overseas” as local virus cases may have been transmitted by international post.

In a statement to the media, Health official Pang Xinghuo said the virus had been detected on the surface of a letter the infected person had received from Canada, per CBS News.

Officials and athletes participating in the Games are required to immediately enter a “tightly controlled bubble” specifically designed for them and separated from the general population.

Additionally, athletes scheduled to compete will face several stringent restrictions not related to the COVID-19 pandemic.

“US athletes competing in Beijing have reportedly been told to leave their phones behind amid security concerns,” reports CNet. “US officials are also staging a diplomatic boycott of the Winter Olympics as a statement against China’s human rights violations.”

In preparation for the Games, China not only designated 18 hospitals for Olympic use but also lockdown cities experiencing surges in COVID-19 cases to control any outbreaks of the virus. 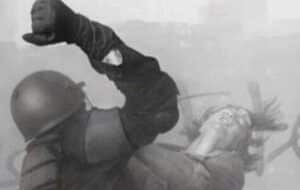 Portland Police Under Investigation for Meme About Beating 'Dirty Hippies'