The governors of Wisconsin and North Carolina became the third and fourth Democrats to ban TikTok on state-owned devices.

The movement to protect sensitive data by insulating state technology infrastructure from applications with foreign ownership has maintained momentum since late November.

Governor Roy Cooper of North Carolina signed an executive order on Jan. 12 prohibiting using or accessing certain applications or websites from state-owned devices, such as computers or mobile phones. The state’s Department of Information Technology has 14 days to prohibit the use of any “applications on state agency information technology systems in a manner that presents an unacceptable cybersecurity risk,” including TikTok and WeChat.

Both applications are owned by companies based in China that are required under the nation’s 2017 National Intelligence Law to assist the government with intelligence work including turning over collected data to the Chinese Communist Party.

Cooper said both TikTok and WeChat lack “sufficient privacy controls” and are tied to “countries that sponsor or support cyber-attacks against the United States.”

“It’s important for us to protect state information technology from foreign countries that have actively participated in cyberattacks against the United States,” said Cooper in a statement. “Protecting North Carolina from cyber threats is vital to ensuring the safety, security, privacy, and success of our state and its people.”

In his Jan. 12 executive order, Governor Tony Evers of Wisconsin prohibited the use of “certain foreign technologies”

Evers wrote that TikTok is capable of “harvesting large amounts of data from devices it is installed on, including when, where, and how the user conducts internet activity” and that his government recognized that “in the digital age, maintaining cybersecurity is critical to state and national security and that new and emerging technologies and applications could pose future potential safety, security, and privacy risks.”

“Preserving the safety, security, privacy, and way of life of the people of Wisconsin is of paramount importance, and the state has gained information and recommendations regarding growing threats imposed by certain foreign vendors, products and technologies that could pose cybersecurity threats, as well as digital privacy and other state and national security risks, which are contrary to the interests of the State and the people of Wisconsin,” the governor wrote.

Republican lawmakers in the state urged Evers in early December to take action to protect the state from potential user data harvesting that could adversely affect residents.

“Wisconsinites expect their governor to be aware of the dangerous national security threats TikTok poses and to protect them from this avenue for CCP intelligence operations,” stated a letter signed by U.S. Sen. Ron Johnson and U.S. Reps. Mike Gallagher, Tom Tiffany, Glenn Grothman, Bryan Steil and Scott Fitzgerald, per Fox 11.

A spokesperson for Evers told the Wisconsin State Journal that his government would continue to defer to “the judgment and advice of law enforcement, cybersecurity and counterintelligence experts regarding this and other evolving cybersecurity issues.”

Since late November, states across the country have taken steps to ensure sensitive resident data stored on government devices cannot be accessed by TikTok’s parent company, ByteDance, or other Chinese technology companies. Mississippi passed a similar ban the day before.

A total of 21 state governments have now issued TikTok bans. 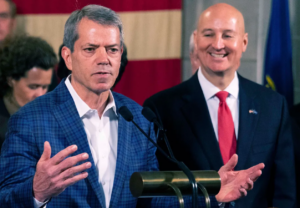