The governor of South Dakota has banned government employees, agencies, and contractors from downloading TikTok on devices owned by the government.

Governor Kristi Noem signed Executive Order 2022–10 on Nov. 29, citing the mounting concern that the social media app poses a threat to national security due to its ties to the Chinese Communist Party. In her announcement, Noem described TikTok as conducting “data gathering operations” on behalf of the Chinese government.

“South Dakota will have no part in the intelligence gathering operations of nations who hate us,” said Governor Kristi Noem. “The Chinese Communist Party uses information that it gathers on TikTok to manipulate the American people, and they gather data off the devices that access the platform.”

The order went into immediate effect.

TikTok is prohibited on any device owned by or leased from the state which has the ability to connect to the internet.

“Because of our serious duty to protect the private data of South Dakota citizens, we must take this action immediately,” said Noem. “I hope other states will follow South Dakota’s lead, and Congress should take broader action, as well.”

More than 1 billion people around the world use TikTok, a short video platform owned by Beijing-based Bytedance.

A bill to ban TikTok from government devices, which was introduced by Missouri Senator Josh Hawley, was unanimously passed by the Senate Homeland Security and Governmental Affairs Committee in May of 2021.

“TikTok is an immediate security threat that has no place on government devices,” said Hawley in a 2021 statement. “This should not be a partisan issue and I’m glad to see my colleagues in the Senate act together to address Beijing’s covert data collection campaign. Banning TikTok from government devices is a good first step towards taking Chinese espionage seriously.”

Hawley had previously introduced the No TikTok on Government Devices Act, which was unanimously passed by the Senate in August of 2020. No action was taken on a related bill introduced to the House in May of 2020.

In a July 2022 statement, the app’s Vice President and Head of Public Policy for Americas, Michael Beckerman, stressed TikTok was committed “to keeping U.S. user data safe, private, and secure.” Beckerman said access to user data “is subject to a series of robust controls, safeguards like encryption for certain data, and authorization approval protocols overseen by [TikTok’s] U.S.-based security team.”

“The intention of these processes and protocols is to ensure that the data is only accessed by those that need it to allow our business and our service to function,” he added. “We’re dedicated to earning and maintaining the trust of our global community, and we will remain focused on protecting our platform and providing a safe, welcoming, and enjoyable experience.” 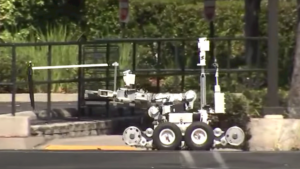