'[This] is deeply disturbing' said one board of supervisors member

The San Francisco Board of Supervisors has voted to allow the city’s police department to deploy remote-controlled robots capable of using lethal force as the city continues to grapple with surging violent crime.

After heated debate among board members, all of whom are staunch Democrats who support gun control, the board voted to approve the policy on Nov. 29, as the San Francisco Police Department clarified the robots would not be armed with guns — just explosive charges “to contact, incapacitate, or disorient violent, armed, or dangerous suspects,” SFPD spokesperson Allison Maxie said.

She added, “Robots equipped in this manner would only be used in extreme circumstances to save or prevent further loss of innocent lives,” such as an event where officers need to stop an active shooter.

The measure passed by an 8-3 vote, but not without strong objections.

“In contrast to the SFPD’s fear-mongering hypotheticals, we don’t have to look far to see why this decision could put San Franciscans in danger,” he added. “We have plenty of examples of police using questionable or unjustified deadly force here at home. We also have examples of misuse of bombs and other explosives all over the country.”

Today’s vote approving the SFPD’s dystopian military equipment policy—which will allow SFPD to use robots to kill people—is deeply disturbing. This is a sad moment for our City, and it shows how far we have strayed from the 2020 reckoning on police violence. Here's my statement. pic.twitter.com/gFLllm3xvF

Watchdog groups urged the city to reject the plan, arguing it would lead to a further militarization of the police, while stating the parameters by which armed robots would be permitted to be used are too vague.

The vote was required by a new California law requiring police and sheriffs to obtain approval for the use of military-grade equipment. The law was drafted in 2021 by San Francisco Attorney David Chiu, who was a state assembly member at the time.

San Francisco police did not state how they obtained the weapons, but a federal program has provided grenade launchers, camouflage uniforms, bayonets, armored vehicles and other surplus military equipment to local law enforcement agencies throughout the country.

The Pentagon program providing military gear to local police was shut down in 2015 under President Obama due to outrage after police in Ferguson, Missouri used an overwhelming show of force against mobs violently protesting the 2014 killing of Michael Brown.

As the San Francisco Bay Area has become one of the most crime-ridden areas of the U.S., officials have been exploring ways to provide additional tools to law enforcement.

The city’s board of supervisors voted in September to allow police to access thousands of private security cameras in real-time without a search warrant, a move which also drew immediate pushback from civil liberties organizations. 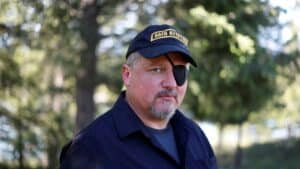