Mississippi is 20th State to Enact Ban on TikTok

Another Republican Governor has banned TikTok on state-owned devices and the state’s network.

Governor Tate Reeves of Mississippi is the 20th governor to take protective action against the social media app, which federal agencies have warned against because of its ties to the Chinese Communist Party. The bipartisan movement has swelled with support since late November.

Reeves said, “Mississippi isn’t going to sit around waiting for the Chinese Communist Party to steal our state government data” and that his order will help “better protect our state’s sensitive information and critical infrastructure.”

State employees have been directed to uninstall, remove, and delete “all relevant applications” from devices issued by the Mississippi government or its departments.

In a letter to Department heads and state agencies, Reeves said the convenience of “cellular phones, laptops, and other wireless communication equipment” comes with “the responsibility” of ensuring the security and protecting sensitive data.

The Mississippi Department of Information Technology Services has been tasked with blocking access to TikTok on the state network.

“We must work together to protect Mississippi against all efforts to access, compromise and interfere with the State’s sensitive information and critical infrastructure,” wrote Reeves.

While in office in 2020, President Donald Trump led an effort to ban TikTok in America. In his August executive order, Trump said it was necessary to take additional steps to “deal with the national emergency with respect to the information and communications technology.”

“TikTok automatically captures vast swaths of information from its users, including Internet and other network activity information such as location data and browsing and search histories,” he wrote. “This data collection threatens to allow the Chinese Communist Party access to Americans’ personal and proprietary information — potentially allowing China to track the locations of Federal employees and contractors, build dossiers of personal information for blackmail, and conduct corporate espionage.”

He noted that the app was already prohibited on devices used or issued by the Department of Homeland Security, Transportation Security Administration, and the United States Armed Forces.

The effort was abandoned by President Joe Biden when he took office.

The US Congress ultimately also banned TikTok on federally-issued, government-owned devices at the end of 2022. 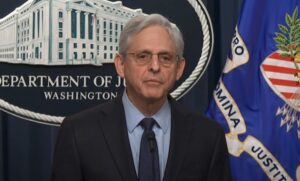