The documents are from when Biden was Barack Obama’s vice president. The materials, marked classified, were found by Biden’s attorneys in a garage and another single document was found in an adjacent room.

Garland has appointed former United States Attorney for the District of Maryland Robert Hur to oversee the review of the documents.

“I strongly believe that the normal processes of this department can handle all investigations with integrity. But under the regulations, the extraordinary circumstances here require the appointment of a special counsel for this matter,” Garland said during the press conference.

Garland added, “this appointment underscores for the public the department’s commitment to both independence and accountability in particularly sensitive matters. And to making decisions indisputably guided only by the facts and the law.”

Biden claimed to be “surprised” by the discovery of the documents.

The president maintains that his lawyers “did what they should have done” when they found the materials.

“They immediately called the (National) Archives and turned them over to the archives,” Biden stated.

The new documents are in addition to those found at his former think tank office in Washington in November.

Richard Sauber, special counsel to the president, said that the Justice Department was immediately notified about the documents and said that the White House is “fully cooperating with the National Archives and the Department of Justice in a process to ensure that any Obama-Biden Administration records are appropriately in possession of the Archives,” according to a report from CBS News.

House Speaker Kevin McCarthy called for a congressional investigation into the matter.

Democrats have been persistently calling for Trump to face charges for allegedly mishandling classified documents by bringing them to his residence at Mar-a-Lago in Florida after he departed the White House. 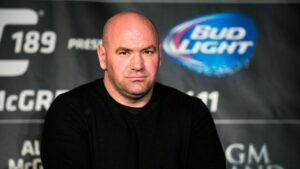 'What Should Repercussions Be?': Dana White Says He 'Owns' New Year's Eve Altercation With Wife