The House of Representatives has notified officials and staffers that no “House-managed” devices may be used to access TikTok.

TikTok has fallen under intense scrutiny by a number of American governors because of its data collection practices and ties to the Chinese Communist Party. American political officials are concerned about the app, which accesses users’ search history and other device information, and contend it is a threat to national security.

The Office of the Chief Administrative Officer notified all members of the House and their staff that the Committee on House Administration had authorized its Office of Cybersecurity to begin removing TikTok from all House-managed devices.

“The Office of Cybersecurity has deemed The TikTok mobile application to be a high risk to users due to a number of security risks,” said the email, which was shared by Politico reporter Nicholas Wu.

Effective immediately, House staffers are not permitted to download TikTok on any mobile devices belonging to the House.

“If you have the app on your House mobile device, you will be contacted to remove it,” stated the CAO, Catherine Szpindor.

“By way of background, the Consolidated Appropriations act, 2023 requires executive branch agencies to begin removing the social networking service TikTok or any successor application or service developed by or provided by ByteDance Limited,” added the email. “The Committee on House Administration has authorized the Office of Cyber Security to implement a similar policy for the U.S. House Representatives.”

TikTok has already been prohibited on devices issued or owned by the Department of Homeland Security, the Department of State and the Department of Defense. The Senate unanimously voted in favor of banning TikTok on any government-owned device on Dec. 15 because of potential cyber vulnerabilities and possible threats to national security.

A total of 18 states – including Kansas, New Hampshire, and Virginia – have all prohibited accessing or downloading TikTok on state-issued devices.

“Today, the Office of Cybersecurity began removing TikTok from federal government devices due to its many security risks. As a leader in the House on this issue, I’m proud to see action to #BlockTheTok,” he tweeted on Dec. 27.

South Dakota Governor Kristi Noem was among the first governors in the nation to adopt a TikTok ban through an executive order.

TikTok has repeatedly said it has taken steps to prevent members of the Chinese Communist Party from accessing American users’ data through “a comprehensive package of measures with layers of government and independent oversight.” The company says its efforts go “well beyond what any peer company is doing today.”

“We have been working with the U.S. Committee on Foreign Investment [CFIUS] for over two years to address all reasonable national security concerns about TikTok in the U.S.,” said TikTok spokeswoman Brooke Oberwetter in an emailed statement, per the Daily Dot. “We believe those concerns can be fully resolved, and CFIUS is currently considering a comprehensive solution that addresses key concerns around corporate governance, content recommendation and moderation, and data security and access.” 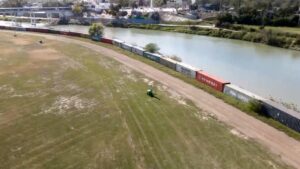