'TikTok is a Trojan Horse for the Chinese Communist Party' said Sen. Josh Hawley who introduced the ban

The United States Senate has voted in favor of banning the use of the social media app TikTok on all government devices, over two years after it was first introduced.

Efforts to prevent cyber security breaches and reduce threats of data harvesting have prompted nine states to ban the popular platform from being downloaded or used on government devices.

The measure was unanimously passed by the senate following a vote on Dec. 15.

Missouri Senator Josh Hawley and Florida Senator Rick Scott introduced the No TikTok on Government Devices Act on March 12, 2020. The senator later reintroduced the measure with Senators Marco Rubio of Florida and Tom Cotton of Arkansas in April of 2021.

Rubio is also sponsoring the Averting the National Threat of Internet Surveillance, Oppressive Censorship and Influence and Algorithmic Learning by the Chinese Communist Party (ANTI-SOCIAL CCP) Act to prevent social media platforms like TikTok that are “in, or under the influence of, China, Russia and several other foreign countries of concern” from operating in the U.S.

“TikTok is owned by a Chinese company that includes Chinese Communist Party members on its board, and it is required by law to share user data with Beijing,” Hawley said in his original announcement. “The company even admitted it collects user data while their app is running in the background – including the messages people send, pictures they share, their keystrokes and location data, you name it.”

“The use of apps like TikTok by federal employees on government devices is a risk to our network and a threat to our national security,” added Scott. “We should all be very concerned about the threat of Communist China, and I hope my colleagues will join me to implement this ban immediately and protect our national security.”

No senators objected to the measure, which prohibits anyone from using or downloading TikTok on phones, tablets, and computers that are owned and issued by the federal government or any government corporations.

“TikTok is a Trojan Horse for the Chinese Communist Party. It’s a major security risk to the United States, and until it is forced to sever ties with China completely, it has no place on government devices,” said Hawley, who has held multiple hearings with TikTok’s representatives since 2019 over security concerns.

“States across the U.S. are banning TikTok on government devices. It’s time for Joe Biden and the Democrats to help do the same,” he added after the measure had been passed.

The governors of Iowa, North Dakota, Alabama, Utah, Texas, Maryland, South Carolina, South Dakota, and Nebraska have all banned TikTok on government devices or networks in order to protect their citizens from a foreign adversary’s cybersecurity breach.

TikTok’s parent company, ByteDance, is based in China and is therefore required by national law to disclose its collected data to the Chinese Communist Party. When any of the world’s one billion daily TikTok users open the app, they are giving the company access to a wide array of personal information, from their locations and cell phone carriers to their devices’ browsing history. It also employs members of the CCP, furthering concerns about potential threats to US national security.

“TikTok raises multiple flags in terms of the amount of data it collects and how that data may be shared with and used by the Chinese government,” declared North Dakota Governor Doug Burgum on Dec. 13. “Reducing this security risk is the right thing to do.”

A spokeswoman for TikTok, Brooke Oberwetter, told The Wall Street Journal that Hawley’s ban “does nothing to advance U.S. national security interests.”

“We hope that rather than continuing down that road, he will urge the administration to move forward on an agreement that would actually address his concerns,” Oberwetter said.

The No TikTok on Government Devices Act will not be referred to the House of Representatives for a vote. It will ultimately need to be signed by President Joe Biden to become law. 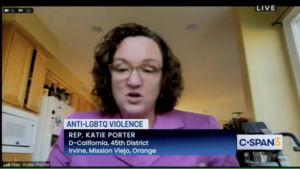