'Anti-LGBTQ Activists Have Appropriated This Terminology ... And Used It To Slander LGBTQ People And Our Allies As Predatory' Said One Witness

California representative Katie Porter said the terms “groomer” and “pedophile” were suggestive of a person’s sexual orientation and identity.

Porter further claimed use of the terms to describe a person was “alleging that a person is criminal” because of their “sexual orientation” or “gender identity.”

“This allegation of ‘groomer’ and ‘pedophile’ is alleging that a person is criminal somehow, and engaged in criminal acts merely because of their identity — their sexual orientation, their gender identity” Porter said during a House Oversight and Reform Committee meeting on anti-LGBTQ violence.

The California representative claimed use of the term in the aforementioned context was “clearly prohibited” according to Twitter’s terms of service though noted its appearance on “hundreds” of posts. Porter asked if Human Rights Campaign (HRC) president Kelley Robinson had taken action against the platform, to which the HRC president responded “very rarely.”

“Instead of taking them down, Twitter elevated them, allowing them to reach an approximate 72 million users,” Porter continued. “This is not just about what happens online. What happens online translates into real harms in people’s lives.”

Rep. Katie Porter (D-CA) says that the terms "groomer and pedophile allege that a person is criminal somehow merely because of their sexual orientation and gender identity" and laments that Twitter allowed groomer "to reach 72 million users." pic.twitter.com/hi6tuAPm4F

“In their minds, trans people either become victims to be saved from ourselves or villains to be punished. One example of this is the misuse of the term ‘groomer,'” Hunt said. “Anti-LGBTQ activists have appropriated this terminology used by survivors of childhood sexual abuse and used it to slander LGBTQ people and our allies as predatory, [and] harmful towards children.”

Hunt further claimed transgender identifying people were “significantly more likely to be victims of sexual abuse than the perpetrators of it,” claiming use of the terms “restrict[s] [trans] rights in the name of protecting children.”

Witness at hearing on "anti-LGBT violence," Olivia Hunt: "Misuse of the term 'groomer'" on social media is leading to violence.

"There's a straight line … from the legislation trying to strip trans people of our human rights to [this] increasingly hostile .. rhetoric" pic.twitter.com/SEG096ENM7

CEO and Executive Director of Inside Out Youth Services Advocacy Organization Jessie Pocock further suggested parents “don’t have the right” to know if their child is “questioning their gender or their sexuality.”

“In our community the age of consent to mental health therapy is 12-years old,” Pocock continued. “So we have laws that enable young people to connect with trusted adults who can support them. That is so important. It prevents suicide.”

Critics have suggested use of the terms inspired November’s shooting at Club Q in Colorado Springs, Colorado which left five people dead and 25 others injured.

“Hate rhetoric from politicians, religious leaders and media outlets is at the root of the attacks, like at Club Q, and it needs to stop now,” said Club Q survivor James Slaugh. “Hate starts with speech. The hateful rhetoric you’ve heard from elected leaders is the direct cause of the horrific shooting at Club Q. I urge LGBTQ+ Americans and allies to join together today, together as one community. Hateful people want to drive us back into closets and live our lives in fear.” 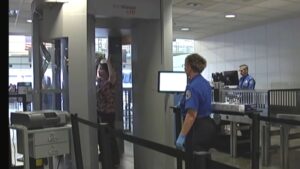