UK Researchers Determine Possible Cause of Mysterious Hepatitis Outbreak That Impacted Over 1,000 Children

At least 22 children died as a result of the illness

Researchers in the United Kingdom believe they know the cause of a previously unexplained liver inflammation detected in over 1,000 children in multiple countries.

The hepatitis outbreak was reported in 35 countries among minors under the age of 12 after first being documented among several British children in January of 2022. The illness is severe and has caused liver failure requiring a transplant.

Research teams in London and Glasgow have linked the outbreak to infants with missing immunity to two common viruses because of delayed exposure due to COVID-19 restrictions.

Specifically, researchers assert the children were not exposed to adenovirus, which can cause stomach issues and colds, and adeno-associated virus two (AAV2), which is latent without a “helper virus.”

Typically, the majority of children have had at least one adenovirus infection by the age of 10, notes health care nonprofit Cedars-Sinai.

Virology expert Judith Breuer, a professor at University College London and Great Ormond Street Hospital who assisted with the research, noted the long-term impact pandemic lockdowns had on children.

“During the lockdown period when children were not mixing, they were not transmitting viruses to each other,” she told the BBC. “They were not building up immunity to the common infections they would normally encounter.”

“When the restrictions were lifted, children began to mix, viruses began to circulate freely — and they suddenly were exposed with this lack of prior immunity to a whole battery of new infections,” Breuer said.

The research teams have suggested that exposure to both viruses in children without previous immunity resulted in the rare form of hepatitis. All the children who contracted the illness had high-levels of AAV2.

Exactly why some children develop liver inflammation is unknown. It is possible that genetic predisposition plays a role in the outbreak.

“There are many unanswered questions and larger studies are urgently needed to investigate the role of AAV2 in paediatric hepatitis cases,” the senior author of the Scottish study, Professor Emma Thomson, told Sky News. Thomson is an infectious diseases consultant at the MRC-University of Glasgow Centre for Virus Research.

“We also need to understand more about seasonal circulation of AAV2, a virus that is not routinely monitored — it may be that a peak of adenovirus infection has coincided with a peak in AAV2 exposure, leading to an unusual manifestation of hepatitis in susceptible young children,” she added.

The United Nations reported on July 13 that 1,010 probable cases of “unexplained severe acute hepatitis” of the virus had been reported in 35 countries in five regions of the world. Roughly half of the reported cases (484) were in Europe and 21 countries.

The United Kingdom was significantly impacted, reporting 27% (272) of the global total of cases. The United States represented one-third of global cases with 334.

The Centers for Disease Control and Prevention reported that the first known American cases of the outbreak were reported in Alabama. By May, more than 180 cases had been documented in the United States. The children did not test positive for the most common strain of hepatitis — Types A, B, C, D, or E.

The World Health Organization noted that the actual number of cases may be underestimated, in part owing to the limited enhanced surveillance systems in place. The agency reported that 48% of the patients were male and the majority of cases were among children under the age of six.

Afflicted children most commonly experienced vomiting, jaundice, general weakness, and abdominal pain. At least 22 children have died as a result of the illness. 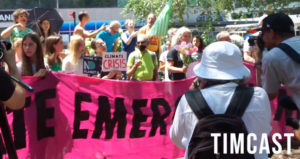 WATCH: Activists Raise Awareness in NYC During Climate Emergency Day — ‘You Should Be Afraid’