A Russian appeals court on Oct. 25 upheld the conviction of U.S. WNBA star Brittney Griner, who was sentenced to nine years in prison for drug possession.

Griner was arrested in February at Moscow’s Sheremetyevo Airport after cannabis cartridges were found in her luggage.

Griner, a two-time Olympic gold medalist and all-star champion, said the cartridges ended up in her bag by mistake and that she did not intend to travel with them. Her attorneys presented evidence to the court that she has been prescribed cannabis for pain management.

By July, the Biden administration was working through diplomatic channels to negotiate Griner’s release. As part of the deal, Russia wanted a prisoner swap — Griner in exchange for a Russian arms dealer named Viktor Bout, who is nicknamed the “Merchant of Death” and is currently serving a 25-year sentence in the U.S. for conspiring to sell weapons to a terrorist organization.

The U.S. government tries to avoid prisoner swaps over fears that it could encourage falsely detained American citizens abroad.

“We put a substantial proposal on the table weeks ago to facilitate their release,” U.S. Secretary of State Antony Blinken said in July. “Our governments have communicated repeatedly and directly on that proposal, and I’ll use the conversation to follow up personally and, I hope, to move us toward a resolution.”

Griner was sentenced on Aug. 4 and told the court that she had made an honest mistake.

The White House says it has not received a substantive response to the prisoner-swap and Russian officials have remained silent on the matter. In September, Biden met with Griner’s wife and assured her family of his “continued commitment to working through all available avenues” to bring her home. 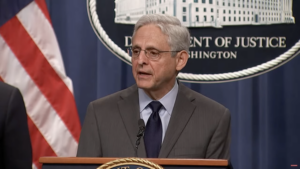 Merrick Garland: DOJ Has 'Obligation,' Will Not Allow Voters To Be Intimidated