Republican Harriet Hageman will be Wyoming’s next congresswoman.

The natural resources attorney sailed to victory with 71% of the vote with 47% reporting.

“Through grit, dedication and determination, they made it work. Ranch life isn’t always easy. But as a family and as a community, we get it done. That’s the Wyoming I know and love,” said Hageman in a campaign advertisement, per AP News.

Hageman defeated Congresswoman Liz Cheney in the state’s August primaries. The Wyoming native and attorney focused on her ties to the state which she contrasted with Cheney’s reputation as an outsider.

Former President Donald Trump endorsed Hageman in September of 2021. Cheney voted to impeach Trump and serves on the House Subcommittee investigating the event of Jan. 6, 2020.

“I strongly endorse Republican House of Representatives Candidate Harriet Hageman from Wyoming who is running against warmonger and disloyal Republican, Liz Cheney,” said Trump. “Harriet Hageman adores the Great State of Wyoming, is strong on Crime and Borders, powerfully supports the Second Amendment, loves our Military and our Vets, and will fight for Election Integrity and Energy Independence (which Biden has already given up).”

“She knows the importance of standing up for individual constitutional rights and fighting back against the federal government, which wants to seize more land and prevent people from being able to provide for their families,” said Cruz.

The Democratic nominee, Lynnette Grey Bull, announced her congressional campaign in the summer of 2020. A resident of the Wind River Indian Reservation, Grey Bull was born in California and lived in Arizona prior to relocating to Wyoming.

“I really don’t care about what the media or ‘conventional wisdom’ say about the chances a Democrat has of winning this election. I don’t think the party system serves us,” she wrote on her camping website.

Grey Bull won her party’s primary with 59.7% of the vote, defeating two challengers.

Fox News notes that “Democratic voter registration in Wyoming continues to decline, to just 11% of the electorate.”

“That’s down by half from a decade ago, though part of the decline may be attributed to Democrats registering as Republicans to help Cheney in this year’s GOP primary,” per the outlet.

Just over 49,000 mail-in ballots were requested in Wyoming. As of Nov. 7, NBC News reported 77% of the 14,717 recorded mail-in or early in-person votes were cast by Republicans. 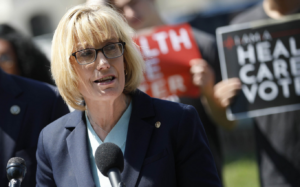