Donald Trump to Back Cheney's Challenger in Wyoming

Trump has already endorsed several candidates ahead of the primaries

President Donald Trump is expected to announce support for attorney Harriet Hageman in the Wyoming primary.

Hageman will challenge Representative Liz Cheney, who has been at odds with Trump since she blamed him for the protests at the Capitol on January 6.

Until she was removed from her leadership position in May, Cheney was the highest-ranking Republican woman.

“If you want leaders who will enable and spread his destructive lies, I’m not your person, you have plenty of others to choose from. That will be their legacy,” Cheney told the conference before the vote.

In August, two Wyoming counties voted to no longer acknowledge Cheney as a Republican.

President Trump has already begun testing his political influence by endorsing candidates in a variety of states.

“The move marks Trump’s most significant endorsement to date as he works to maintain his status as GOP kingmaker and make good on his threat to exact revenge on those who voted to impeach him or blocked his efforts to overturn the results of the 2020 election,” says the Associated Press.

Harriet Hageman is a trial attorney who currently serves as Senior Litigation Counsel for the New Civil Liberties Alliance. A fourth-generation Wyoming native, she has a bachelor’s degree in Business Administration and a law degree from the University of Wyoming. In 2018, she ran for governor and received 21% of the votes.

According to Politico, Hageman has a reputation as “a conservative activist and top land-use attorney in a state where land is a political issue [and] her tough-talking campaign for governor made her a conservative favorite.”

She is “one of Cheney’s only likely challengers who had previously run statewide in Wyoming,” according to the outlet.

The website Hageman for Wyoming says, “We must return to the foundational principles that are the basis of our prosperity and happiness.”

Trump reportedly met with Hageman at his Bedminster, New Jersey, golf club in August in addition to several other candidates. Newsweek reported that Trump had previously met “with state Rep. Chuck Gray and attorney Darin Smith, both of whom intend to oppose Cheney in the Republican primary.”

A spokesperson for Trump declined to comment about the meeting but did tell Politico “they hoped a Trump endorsement will limit the numbers of challengers so that Cheney could not win renomination with only a plurality.” 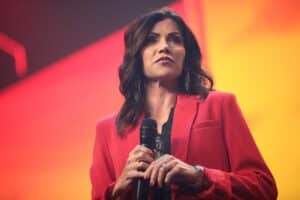