Harriet Hageman is a Wyoming native and lawyer who specializes in water and natural resource litigation. She is challenging Cheney, who was removed from the Republican Party following a vote from House Republicans in May 2021.

Cruz said he was “proud” to endorse Hageman, who he predicted would be a “rock-ribbed conservative congresswoman who will always defend the Constitution.”

“She knows the importance of standing up for individual constitutional rights and fighting back against the federal government, which wants to seize more land and prevent people from being able to provide for their families,” Cruz said in a statement to Fox News Digital.

“With Harriet in the House, Wyoming will always have a strong, principled, Constitution-loving member of Congress who will never forget who sent her there,” the senator added.

Hageman told Fox News she was “honored” and grateful for the endorsement, describing Cruz as “an inspirational constitutionalist senator.”

“I strongly endorse Republican House of Representatives Candidate Harriet Hageman from Wyoming who is running against warmonger and disloyal Republican, Liz Cheney. Harriet is a fourth-generation daughter of Wyoming, a very successful attorney, and has the support and respect of a truly great U.S. Senator, Wyoming’s own Cynthia Lummis,” Trump said at the time.

Trump and Cheney, who the former president has labeled a RINO, have clashed repeatedly.

Cheney serves on the House subcommittee investigating the security breach at the Capitol on Jan. 6, 2021 and voted to impeach Trump for his role in the conflict between protestors and law enforcement. In a number of interviews, she said Trump is an “unfit choice for office” and that he cannot be allowed “anywhere near the Oval Office ever again.”

Cheney is the daughter of President George W. Bush’s Vice President, Dick Cheney. She moved to Wyoming from Virginia in 2012.

The congresswoman has said the subcommittee may refer Trump to the Department of Justice to face criminal charges for his role in the events of Jan. 6 – a statement that was denounced by Trump.

“Warmongering and despicable human being Liz Cheney, who is hated by the great people of Wyoming (down 35!), keeps saying, over and over again, that HER Fake Unselect Committee may recommend CRIMINAL CHARGES against a President of the United States who got more votes than any sitting President in history,” Trump wrote in a post on Truth Social. “Why doesn’t she press charges instead against those that cheated on the Election, or those that didn’t properly protect the Capitol?”

Hageman, who previously advised Liz Cheney’s 2014 Senate campaign, has echoed Trump’s questions about the fraud during the last presidential election.

“We have serious questions about the 2020 election,” Hageman said during a debate on June 30, noting the role funding from Meta CEO Mark Zuckerburg played in some states.

The former Republican National Committeewoman has also taken issue with Cheney’s actions while in Washington DC, accusing her of forgetting who she was elected to serve.

“We didn’t elect her to Congress to wage her personal war with President Trump,” Hageman told Business Insider. “The people of this state want their only member of Congress to reflect their views and values, and they’re going to fire Liz Cheney.”

Hageman has faced criticism for her past as an alleged “Never-Trumper” and her support for Cruz during the 2016 election.

Still, she comfortably leads Cheney in the polls. The Casper Star-Tribune released a poll on July 15 showing Hageman was ahead of Cheney 52% to 30% among voters statewide. It was the first independent, public, in-state poll of the race.

Wyoming will hold its primary on Aug. 16. 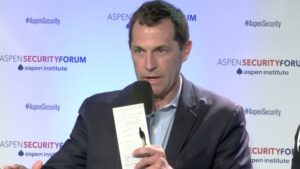 DNA Sent To Ancestry Sites Could Be Used For Targeted Bioweapons