A new poll from the University of Wyoming indicated Harriett Hageman leads Congresswoman Liz Cheney by 30 points in the upcoming congressional primary.

The race has been marked by tension between Cheney and President Donald Trump, who endorsed Hageman in 2021.

Initially, 57% of voters polled said they will support Hageman, a former attorney and former member of the Republican National Committee.

Cheney trailed Hageman, with 28% of those polled indicating they plan to vote for the incumbent. Additionally, 10% of likely Republican voters reported they are undecided.

In total, 562 residents who identify as likely voters responded to the poll which was conducted between July 25 and Aug. 6. The error rate is plus or minus 4%.

“Given the unique attention this race is receiving, and the accompanying increases in voter registration and potential party switching, we decided to field this survey to a random sample of all Wyoming residents on cellphones and landlines and work to identify likely voters in the GOP primary,” says Brian Harnisch, director of UW’s Wyoming Survey and Analysis Center. “When looking only at residents who say they are Republican and likely voters in the primary, we actually see Hageman leading by roughly 50 points.”

The poll also found that half of people surveyed who identify as Democrats planned to vote in the Republican primary. Approximately 98% of those voters intended to cast a ballot for Cheney.

AdImpact, an advertising tracking company, reports that Cheney’s campaign has spent significantly more on advertisements than the Hageman campaign – $2 million compared to $770,000. Notably, ads supporting Hageman have been financed by a number of outside political groups, per NBC News.

One video from Wyoming Values includes an appeal from Donald Trump Jr., who says Cheney “has bowed to the Democrat elites like Nancy Pelosi.”

Hageman’s lead over Cheney has been steadily increasing as the Aug. 16 primary drew nearer.

“Cheney critics complain that she rarely visits, with many of them calling her a ‘RINO’ (Republican in name only) as they air their grievances,” reported the Casper Star-Tribune. “Voters also called her a ‘carpetbagger,’ an insult she’s been hit with since she moved to the state in 2012, a year before her unsuccessful bid for U.S. Senate.”

The Star-Tribune reported on July 15 that its poll indicated Hageman leads Cheney 52% to 30%.

During a July debate, Cheney has called on Hageman to affirm that the 2020 presidential election was not stolen and said the natural resources lawyer would not do so because she is “beholden to Trump.”

Hageman, in turn, has positioned herself as a Wyoming native who is better connected to voters than Cheney.

“The press and certain people have obsessed over Jan. 6. Over 30,000 miles of campaign travel through Wyoming, the only time that the J6 situation ever comes up is when people talk about how unfair this entire committee is,” Hageman said at the debate. “They’re focusing on something that happened 18 months ago. They’re not focusing on the issues that are important to the people in Wyoming.” 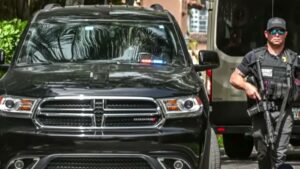