The trial has lasted 17 days

The jury hearing the case of a man accused of attacking a Christmas parade in Wisconsin last year is expected to hear closing arguments after 17 days of trial.

Darrell Brooks is charged with killing six people and injuring dozens more while intentionally driving an SUV into a crowd assembled for a Christmas parade in downtown Waukesha in November of 2021. Brooks has been representing himself.

Waukesha County Circuit Judge Jennifer Dorow began the 17th day of trial by reading jury instructions for the 76 counts against Brooks. Court resumed at 8:30 AM on Oct. 25. After the 70 pages of instructions are read and lunch break is called, the prosecution and Brooks will each have one hour to present their closing arguments.

Continuing a pattern of behavior demonstrated throughout the trial, Brooks began speaking when jurors enter the courtroom in violation of permitted conduct. Dorow had the defendant removed to a separate courtroom twice before 9:30 AM. Brooks has been repeatedly removed in the days preceding today following outbursts in the courtroom.

While reading instructions to the jury, Dorow said that neither Brook’s decision to represent himself nor his appearance from another courtroom during the trial should influence their decision.

The evidentiary portion of the trial was declared over on Oct. 24 by Dorow after Brooks refused to answer questions and “pretended he could not hear when she tried to determine whether he planned to testify on his own behalf, or call other witnesses,” per CBS Chicago.

The prosecution called a number of witnesses who were present at the parade and who testified to the vehicle’s movements and its contact with the fatally injured victims. The jury was shown photos of the red SUV, including damage to the front and pieces of victims’ clothing caught in the windshield. Paperwork with the name “Darrell E. Brooks” was also recovered from inside the car. Dorow also permitted the jury to view the vehicle in person in a secure garage in the court complex.

A mechanical inspector with Wisconsin State Patrol later testified that nothing about the car’s brakes and tires would have prevented the driver from stopping the car, per Fox News.

Brooks asked the judge to postpone sentencing until next week if he is convicted. Dorow agreed to the request.

After each side presents their closing arguments, Dorow will read another 30 pages of instruction to the jury before their deliberations can begin.

The charges against Brooks include six counts of homicide. He could be sentenced to life in prison if convicted. 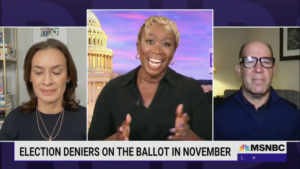 'They Lost Their Democracy': MSNBC Contributor Says Fear Of Inflation Led To Hitler