Man Accused of the Waukesha Parade Attack Removed from Courtroom, Asks for Proof He is an American Citizen

Jury selection continues for a second day on Oct. 4

The man accused of driving his car into a Wisconsin city’s Christmas Parade was escorted from the courtroom for repeatedly disrupting the start of jury selection.

Darrell Brooks has been charged with six counts of first-degree intentional homicide as well as 61 counts of reckless endangerment. He was granted his request to represent himself last week.

Jury selection was scheduled to begin at 8:30 AM. During the proceeding on Oct. 3, Waukesha County Judge Jennifer Dorow ordered Brooks to be removed from the courtroom after the 40-year-old repeatedly voiced his complaints and disagreements.

Brooks took issue with being “bombarded” with paperwork, declared himself a “sovereign citizen” who was not under the court’s jurisdiction, and declared he did not recognize the name “Darrell Brooks.”

At one point, Brooks refused to reenter the courtroom after a recess and Dorow had to order him to be brought in. Court records show that, just after 3 PM, bailiffs began checking on the defendant every 10 minutes “to see if he’s awake and listening to the proceedings.”

Brooks also submitted a handwritten document to the court with a list of demands, including asking the court to produce “verified proof” that he is an American citizen. He repeatedly requested Dorow state her name and explain the claims against him. He also requested to be given more time to review the documents he received on Sept. 30 after taking over as his own representation. He equated not having enough time to review the discovery to “going into a gunfight with a butter knife.”

Dorow called at least 11 recesses before ordering Brooks to watch the proceeding via video broadcast from another room. She has said he would be held in contempt of court if he could not be less disruptive and that she can revoke his right to represent himself at her discretion.

While he was in the other room, Dorow would use a mute button to prevent Brooks from speaking unless he was being respectful.

The episode warns of potential problems that will arise during Brooks’ trial, where he cannot be tried in absentia because he is serving as his own representation. He could potentially be declared incompetent, according to Fox News.

Brooks has a lengthy criminal history with crimes committed in multiple states and against women and members of his family. He allegedly attacked an ex-girlfriend, broke her phone and ran her over using the same SUV he drove into the crowd at the Waukesha Christmas Parade on Nov. 21, 2021.

Dorow also asked the prosecution to remain at their desks during the trial and deliver their opening and closing arguments while seated. Dorow said the request was made to ensure fairness as Brooks will be secured to his desk during the trial. 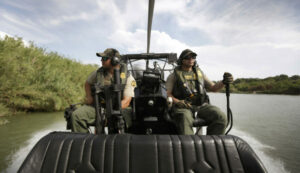