Defendant Darrell Brooks ranted for almost an hour complaining about the fairness of the court proceeding and of the jury on the ninth day of the Waukesha Christmas Parade trial.

Judge Jennifer Dorow denied his request that the trial be dismissed.

Brooks, who is accused of intentionally driving his car into a Christmas parade in downtown Waukesha, is representing himself. He has been repeatedly castigated for his decorum and conduct by Dorow.

Brooks is facing over 70 charges, including six counts of first-degree intentional homicide. While the jury was in the courtroom, he began questioning the legitimacy of the case against him as well as the subject matter jurisdiction. The 40-year-old argued the proceeding were violating his sixth amendment rights and that he had not received the documents he requested from the judge’s office, including certification of prosecutors’ licenses to practice law and an affidavit proving Dorow’s oath of office and that she has “no bias, no conflict of interest and no interest in the outcome of the case.”

“There’s so many clear biases and questions that are not being asked based on judicial determinations made by your Honor,” said Brooks. “At minimum, I deserve for the subject matter jurisdiction to be verified and proven. I’ve raised that issue many times, pretty much every day. My filings have been disregarded. I haven’t gotten written copies of any of them.”

Prior to the start of the trial, Brooks told Dorow he did not recognize the name “Darrell Brooks” and submitted a handwritten document to the court demanding, among other requests, the court prove he was legitimately an American citizen.

“I’m basically sitting here confused because I don’t understand why these proceedings are allowed to continue,” Brooks said during his speech on Oct. 13.

“I will not have you claim legitimacy for what are debunked, frivolous, sovereign arguments,” said Dorow, cutting the defendant off.

Waukesha County District Attorney Sue Opper said Brooks intentionally requested to represent himself and therefore his attack on the trial’s legitimacy was “highly offensive,” per CBS 58.

“He has an agenda here,” Opper said. “It’s to stall, delay, disrupt, intimidate, and it’s not going to work.”

Brooks said Opper’s claims were a “load of crap.”

The jury heard more testimony from witnesses who were in the crowd when the red SUV broke through a police barrier.

Three of the nine members of Milwaukee’s Dancing Grannies – Virginia ‘Ginny’ Sorenson, Tamara Durand and Lee Owen – were killed when the SUV plowed into the parade. One member’s husband, Wilhelm ‘Bill’ Hospel, was volunteering with the group and was also killed.

“It all happened in a matter of seconds,” testified Laura Thein, a member of the group who was at the parade. “And after the car kept going, I looked down the road and all I seen were bodies. I thought I was in a war. Because there were so many.”

Thein also said she never saw the vehicle slow down.

“I couldn’t even find Tamara (Durand) and Lee (Owen),” said Thein. “When they were hit, they went flying onto the sidewalk. She was thrown on the sidewalk. That’s why I didn’t see her in the road.”

Dorow cut off Brooks’s cross-examination of Thein after he questioned what media coverage of the incursion she had seen.

None of the witnesses testified they saw Brooks in the driver’s seat of the car, reports WUWM.

Brooks questioned if Biedrzycki could know what caused the damage to the car.

The state is expected to rest its case on Oct. 17, at which point Brooks will have the opportunity to make an opening statement and call witnesses. 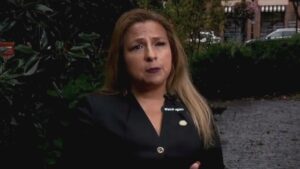