Michigan voters will decide if abortion should be a constitutionally protected right this fall.

The state’s Supreme Court ruled 5-2 on Sept. 8 that an amendment on abortion rights must be included on the November ballot.

The Michigan Board of Canvassers obeyed and unanimously voted to include the amendment on the ballot following a Sept. 9 vote. The board had previously deadlocked on the measure after debating the significance of grammatical errors in the proposed amendment.

“The challengers have not produced a single signer who claims to have been confused by the limited-spacing sections in the full text portion of the proposal,” wrote Chief Justice Bridget McCormack in the majority opinion, per USA Today. “They would disenfranchise millions of Michiganders not because they believe the many thousands of Michiganders who signed the proposal were confused by it, but because they think they have identified a technicality that allows them to do so, a game of gotcha gone very bad.”

A petition regarding the proposed amendment garnered over 750,000 signatures from the state’s 83 counties. After the majority of the signatures were verified, the board recommended the measure for certification.

The deadlocked vote left it unclear if Michigan would “join a growing number of states where voters will determine to what extent abortion remains legal following the fall of Roe v. Wade — with votes scheduled for November in California, Vermont, Kentucky and Montana,” noted Politico. “Along with a slew of pending court cases and state legislative battles, these ballot initiatives have the potential to remake the country’s abortion access map as the number of states implementing near-total bans has mounted.”

Ballot measures had to be approved by Sept. 9.

The proposed amendment would “establish new individual right to reproductive freedom, including [the] right to make and carry out all decisions about pregnancy, such as prenatal care, childbirth, postpartum care, contraception, sterilization, abortion, miscarriage management, and infertility.”

Michigan lawmakers would have the option to prohibit abortions after fetal viability with exceptions “to protect a patient’s life or physical or mental health.”

Citizens to Support MI Women and Children, an anti-abortion group, has urged voters to oppose the proposal.

“Adding Proposal 3 to the Michigan Constitution will cut parents out forever when it comes to their children and their decisions on all matters related to pregnancy—including abortion,” the organization wrote on Twitter the day after the Supreme Court’s decision.

If adopted, the amendment would immediately invalidate any state laws that may be in conflict. Michigan law enforcement would not be permitted to prosecute anyone seeking an abortion or anyone who helps a pregnant woman get an abortion.

Earlier this week, a Michigan judge found that a law passed in 1931 that made performing an abortion a felony was unconstitutional.

Judge Elizabeth Gleicher affirmed a legal challenge filed by Planned Parenthood Michigan and agreed that the ban violated the Due Process, Equal Protection, and Retained Rights clauses of the state constitution. 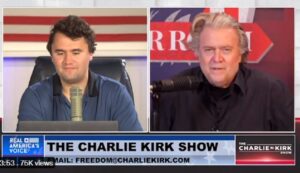 BREAKING: Steve Bannon Says at Least 35 Trump Allies Had Their Homes Raided By the FBI on Thursday