‘The Orthodox world has seen that for the Russian invaders Easter means nothing,’ the Ukrainian President said

Ukrainian President Volodymyr Zelensky rebuked Russian President Vladimir Putin for failing to observe a ceasefire during Orthodox Holy Weeks as a snub to the faithful.

Zelensky said during a national address on April 25 that Putin showed his disregard for the Orthodox community. Speaking the day after Orthodox Easter, Zelensky said Russia had not observed the suggested pause in military operations and instead “congratulated Ukraine on Easter with an air threat almost all over our country.” The Ukrainian president said missile strikes occurred in several locations.

“This is just a deliberate destruction of life in Ukraine. Destruction that did not stop even on the greatest Orthodox holiday,” Zelensky said, per The Hill. “Russia was offered an Easter ceasefire. But the Orthodox world has seen that for the Russian invaders Easter means nothing.”

While over 70% of each country’s population identified as Orthodox Christina at the time, church attendance in both Ukraine and Russia was relatively low.

Still, as the Economist observed in 2019, “religion is linked to national identity: 51% of Ukrainians say it is important for a person to be Orthodox to be truly Ukrainian, and 57% of Russians say the same. Their Christian history is long and closely entwined.”

“Russian leaders, including Vladimir Putin, have traced the roots of [Russia, Ukraine, and Belarus] back to [the Kievan Rus] kingdom in an effort to justify their regional hegemony,” the outlet observed. “As national boundaries shifted, the shared origin of the Russian and Ukrainian churches bound them together.”

The possibility of a formal pause in fighting had been urged by the United Nations in the week leading up to the April 24 Easter holiday.

U.N. Secretary-General Antonio Guterres asked Russia and Ukraine “to silence the guns and forge a path to safety for so many at immediate risk.”

“The onslaught and terrible toll on civilians we have seen so far could pale in comparison to the horror that lies ahead. This cannot be allowed to happen,” he told the media.

Dmitry Polyanskiy, Russia’s deputy UN ambassador, said his nation would not observe the ceasefire on April 19. He called the request “insincere, and in practice they merely point to an aspiration to provide Kyiv nationalists breathing room to regroup and receive more drones, more antitank missiles and more MANPADS,” per Fox News.

MANPADS are man-portable air-defense systems, according to The New York Times.

The following day, Ukraine and Russia reportedly agreed to establish a humanitarian corridor so women, children, and elderly people could leave the port city of Mariupol in the east of Ukraine.

On April 22, Putin declared his forces had taken control of Mariupol. He had ordered his troops to not attack the last holdout in the city — a steel mill with soldiers and civilians inside.

The Russian president reported changed tactics over the weekend.

“Troops supported by air firepower and artillery shelling attempted to storm the Azovstal steel plant – the city’s last stronghold where more than 2,000 soldiers, as well as civilians, are holed up, starved of humanitarian aid,” reports The Express.

In an Easter video address filmed in Saint Sophia Cathedral in Kyiv, Zelensky said his country would not fall to “wickedness” and would survive the darkness Russia had inflicted upon Ukraine.

“Today, we still believe in the new victory of Ukraine and we are all convinced that we will not be destroyed by any horde or wickedness,” he said.

In addition to delivering his national address, Zelensky met with United State Secretary of State Antony Blinken on April 25 for approximately three hours. 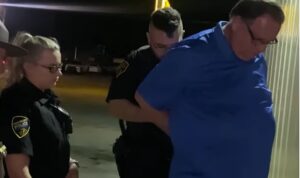