Russian President Vladimir Putin announced his forces had taken control of Mariupol in a statement on April 21.

“The completion of combat work to liberate Mariupol is a success,” he said during an appearance with his defense minister. “Congratulations.”

Mariupol is a port city in the southeastern region of Ukraine, described by some outlets as “a global symbol of defiance.”

“Top officials have repeatedly claimed it was about to fall, but Ukrainian forces have stubbornly held on in the face of overwhelming odds,” reports the Air Force Times.

Ukrainian soldiers are reported to still be defending the Azovstal steel mill complex in addition to an estimated thousand civilians. The plant is about four square miles in size and allegedly has 15 miles of tunnels and bunkers.

“It’s questionable whether he does control Mariupol,” Biden said in a statement. “There’s no evidence yet that Mariupol has completely fallen.”

The president also announced his government would supply an additional $800 million in military assistance to Ukraine. This includes heavy artillery, 144,000 rounds of ammunition, and an unspecified number of drones. Biden also wants to extend the $13.6 billion approved last month by Congress for military and humanitarian aid.

“Ukrainian officials also said about 1,000 civilians are also trapped there,” reports USA Today. “Deputy Prime Minister Iryna Vereshchuk on Friday called for Russia to open up humanitarian corridors for civilians in the plant to evacuate.”

Putin has ordered his soldiers not to storm the steel mill, which has been described to the Associated Press by officials as “securely blocked.”

“The capture of Mariupol would represent the Kremlin’s biggest victory of the war in Ukraine,” notes The Arkansas Democrat Gazette. “It would help Moscow secure more of the coastline, complete a land bridge between Russia and the Crimean Peninsula, which Russia seized in 2014, and free up more forces to join the larger and potentially more consequential battle now underway for Ukraine’s eastern industrial heartland, the Donbas.”

The development came the day after the head of Ukraine’s Orthodox Church warned his followers not to go to Easter services held in the evening because of the possibility of Russian attacks in key cities. 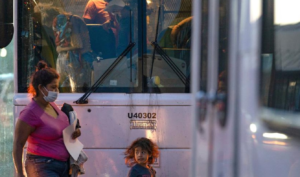