An Ohio school board president has resigned after being busted in a To Catch a Predator style YouTube sting.

Goshen Local Schools President John Gray was caught by volunteer pedophile exposers “PCM: Predator Catchers Muncie” while allegedly trying to meet someone that he believed to be an 11-year-old girl.

Gray drove three hours to Randolph County, Indiana on Saturday, where he hoped to meet the person that he was led to believe was a young child.

In the video, Gray is confronted in a store by a woman claiming to be the mother of the “child” that he had been speaking to and was trying to meet.

The woman and the camera crew assure him that they are not law enforcement, but that they would like to have a word with him outside.

Gray tells the crew that he is 55-years-old and that he believed the child to be “12 or 13, something like that.” He was repeatedly told during their online and phone exchanges that the girl was “11-years-old.”

The disgraced school official said that he had messaged the girl on Kik after receiving her handle from “someone else.” He did not specify who.

“I find there’s a lot of kids on there that need support,” Gray said. Kik has a reputation for being unable to handle the child exploitation that runs rampant on the app.

Gray attempted to laugh off the situation and pretend that he had just stopped at the Dollar General, three hours from his home, to buy Gatorade and gummy bears for the child. He claimed that she wanted to have a sexual encounter with him, but that he was not interested.

Eventually, the group confronts him directly about the messages that he was sending. Gray admitted that he said that he wanted to “cuddle,” “make out,” and watch movies.

Gray also repeatedly said that the “child” was “starving” for “male attention” because he believed that she did not have a father. He admitted that he told her he would “make out” with her as a “father-daughter type deal.” He also confessed to saying that he wanted the girl to model in their “bra and panties,” give her a “hot bath and a massage,” and rub her private parts.

Gray wanted the child to call him “grandpa” while he was doing this and say “don’t touch me there grandpa.” He claimed this was because he is a grandfather and that he has a seven year old granddaughter.

When asked how this would not escalate to sex, Gray claimed that he cannot get erections.

At the end of the video, Farmland Police Department and the Randolph County Sheriff’s Office arrive and handcuff Gray — but he is eventually allowed to leave on his own.

“On Sunday, Goshen police confirmed that they were at Gray’s house and he was taken to the hospital for a psych evaluation,” local station WLWT reports.

The school district issued a statement saying that they were made aware of Gray’s actions late Saturday evening and that he resigned on Sunday.

Gray was serving his fifth term as president.

“To be clear, Saturday’s incident occurred outside of the Goshen Local School district. Our district leaders will be consulting with legal counsel and should more information become available, we will communicate it to our families immediately,” the statement continued. “Due to the fact that this is an ongoing investigation we have no other comments at this time.”

Timcast has reached out to the Farmland Police Department and the Randolph County Sheriff’s Office to find out why Gray was uncuffed and allowed to leave. We will update this story if a comment is provided. 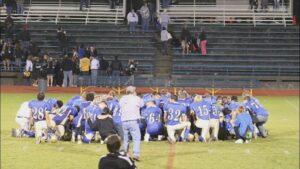