WATCH: AOC’s Supporters & Critics Protest Outside of Texas ‘Get Out the Vote’ Rally

The “Get Out the Vote” rally took place at the Paper Tiger event venue days before early voting kicked off for the 2022 Texas primary elections.

Outside the event, demonstrators gathered on opposing sides of the street to speak out against — and on behalf of — Ocasio-Cortez.

Elad Eliahu was on the ground to speak with those gathered outside to discuss the efficacy of progressive policies, the possibility of Texas turning blue in forthcoming elections, and concerns over possible communist and Marxist influence among Democrat candidates. 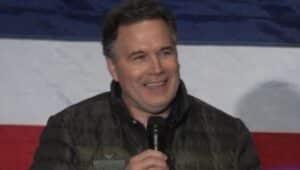