The race for the next governor of Virginia has reached its final two weeks.

Education has become a key issue in the race, with clashes over Critical Race Theory at school board meetings gaining national media coverage.

“This is a race that is very much in the margin of error. One of these ‘too close to call’ contests,” Stephen Farnsworth, director of the Center for Leadership and Media Studies at the University of Mary Washington, told CBS News. “What you see here is very much an appeal to the ideological base of both sides.”

“The image that the democratic candidates around the state are trying to present is that the business of the schools is under threat by extremists who want to create a very different educational system than the one that exists right now,” he said. “And on the Republican side, there is this idea that there is a liberal-left agenda that is out there. Critical Race Theory is an important part of the Republican agenda right now, even though Critical Race Theory isn’t taught in Virginia schools.”

Often, Farnsworth said, a Virginia governor race that follows a presidential election is regarded by some as a “mid-term” grade on a president and could indicate the outcome of mid-term elections to follow.

Former Governor Terry McAuliffe, the Democratic candidate, served from 2014 to 2018.

He abruptly ended an interview yesterday after a local reporter asked him about Critical Race Theory.

First Lady Jill Biden spoke at a campaign event on Oct.15. She is the first of several well-known Democrats expected to stump for McAuliffe, including Vice President Kamala Harris and former President Barrack Obama, who is scheduled to speak at an event on Oct. 23.

“Virginia needs someone who will work toward progress, not re-fight the battles of our past. Virginia, you need somebody that you can trust,” Biden said.

Republican nominee Glenn Youngkin reaffirmed his stance against Critical Race Theory on Oct. 19 in an interview with ABC 7 News.

He said he would invest in education, ensure that schools are open five days a week for in-person instruction, and raise standards. He noted that under McAuliffe, 88 schools lost their accreditation. Instead of addressing the issues, Youngkin said the government lowered thresholds so none of the schools would fail.

He noted that educational standards in that state are considered the lowest in the nation and that students of all races and abilities are struggling. He also pledged to ban Critical Race Theory in Virginia Schools.

Vote for @GlennYoungkin if you believe parents should have a say in their children’s education! https://t.co/DTfNnsqV2G

According to CNN, “both candidates, who themselves voted early, have bombarded the airwaves with ads during the early voting period, which began on September 17, hoping voters will choose to come out early and either vote in-person or request a ballot to vote by mail. Campaigns traditionally like to drive their supporters to vote early because it allows them to focus more on harder-to-reach voters in the final days leading up to Election Day.”

Polling company The Trafalgar Group released data on Oct. 14 that indicated Youngkin had obtained a slight lead in the extremely close race. 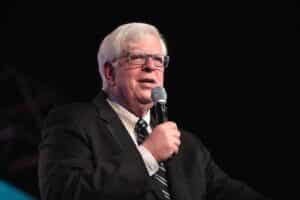 Dennis Prager Tests Positive for COVID-19, Says He Was Was Trying To Contract The Virus 'The Entire Time'