McAuliffe Walks Out of Interview, Snarls at Local Reporter for Asking Tough Questions

Democratic gubernatorial candidate Terry McAuliffe abruptly left an interview with a local reporter and snarled at him for not “asking better questions.”

While debuting the interviews, WJLA anchor Jonathan Elias told viewers that McAuliffe’s interview was shorter because he had walked out.

“So if you watch those entire interviews on our website, we do want to point out that the Terry McAuliffe interview is shorter than our interview with Glenn Youngkin. That was not by our doing,” Elias told viewers during Tuesday’s evening newscast. “Nick offered both candidates 20 minutes exactly to be fair for the interviews. McAuliffe abruptly ended 7News’ interview after just 10 minutes and told Nick that he should have asked better questions and that Nick should have asked questions 7News viewers care about. That’s what he said.”

The question that seemed to ruffle McAuliffe was when he was asked about a comment he made last month saying that “I don’t think parents should be telling schools what they should teach.”

“So are you saying parents shouldn’t have a voice in their kids’ education?” Minock asked.

“So did you misspeak during that debate?” Minock followed up.

“No!” McAuliffe quickly responded. “I was talking about what we need to do, bringing people together. We have the state boards, we have the board of education and we have the local school boards who are all involved in this process. But the issue is how do we deliver a world class education.”

The reporter went on to ask if McAuliffe would be issuing mandates about how schools should teach, prompting the candidate to attack Youngkin for using “racist dog whistles” while calling for a ban on Critical Race Theory.

“He’s talking about issues that don’t even exist in Virginia and we’ve got to move past that,” McAuliffe said.

Minock went on to ask about how McAuliffe would handle crime and public safety — then vaccine mandates for schools.

“All right, Nick. We are already over time,” a McAuliffe aide can be heard telling the reporter.

“All right, we are over. That’s it. That’s it,” McAuliffe said as he started to walk off. “Hey, I gave you extra time. C’mon man.”

The reporter responded by saying “well, we did.” 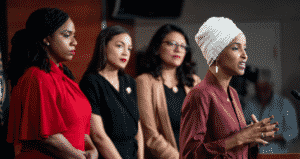