The total was revealed by FEC records reviewed by Fox News

Members of the “Squad” collectively spent over $100,000 on private security, according to FEC documents.

In an interview with CBS News in August, Bush defended her actions while also advocating for an end to police funding:

“I’m going to make sure I have security because I know I have had attempts on my life. And I have too much work to do. There are too many people who need help right now for me to allow that. So If I end up spending $200,000 — if I spend ten more dollars on it, you know what? I get to be here to do the work. So suck it up. And defunding the police has to happen. We need to defund the police and put that money and put that money into social safety nets.”

The New York Post noted that Bush “who often wears a Black Lives Matter or a ‘Y’All Gone Stop Killing Us!’ t-shirt, says she believes defunding the police would prevent the deaths of people like Michael Brown and Breonna Taylor.”

The BREATHE Act, which the representative introduced on July 6, would have also launched a reparations program for African Americans and those deemed to have been harmed by the criminal justice system. The bill sought to end federal programs and agencies used to support Immigration and Customs Enforcement. 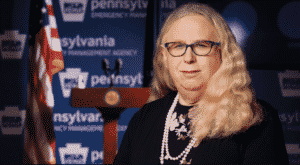