Members of the United Kingdom’s Conservative Party will select either Rishi Sunak or Liz Truss to be the next prime minister.

The party narrowed the options through a series of votes after Prime Minter Boris Johnson announced he will resign from his office.

Grassroots favorite Minister of State for Trade Policy Penny Mordaunt was the last to be eliminated. She has consistently placed second for all four of the last rounds of voting.

“Thanks to everyone for all your hard work. We go forward together,” Mordaunt said on Twitter after the Party’s vote.

A statement released through her campaign congratulated Sunak and Truss, calling for unity and focus for “the job that needs to be done.”

“I am a one nation, proud Brexiteer. My campaign put forward a positive vision for the country I love so much, remembering who we are here to serve,” Mordaunt said. “Our mission is not only to deliver on what we promised but to win the fight against Labour at the next general election. I hope to play my part in both.”

Sunak, the former Chancellor, won all four rounds of voting – including securing 137 votes in the final round. If elected, Sunak would be the nation’s youngest prime minister at 42 and its first prime minister of South Asian descent.

After working as a hedge fund manager for Goldman Sachs in the United States, Sunak was elected to Parliament in 2015.

Current Prime Minter Boris Johnson appointed Sunak Chancellor in 2020, where he was tasked with overseeing the nation’s economy during the COVID-19 pandemic.

Sunak’s wife, Akshata Murty, is the daughter of an Indian tech billionaire and has been criticized for not paying taxes on income she generated overseas.

“Sunak also was criticized for holding onto his American Green Card — which signifies an intent to settle in the U.S. — for two years after he became Britain’s finance minister,” per ABC News.

If elected Prime Minister, Sunak has vowed to get control of inflation plaguing the nation.

Foreign Secretary Liz Truss trailed Mordaunt until the final round of voting, where she placed second with 113 votes. Truss, who was elected to Parliament in 2010, is well known for a 2014 speech wherein she described the statistic that Britain imports two-thirds of its cheese as a “disgrace.”

“Her appeal, even her most reluctant supporters say, is that she is dynamic, a workaholic who is across the detail of policy. Others believe she can steady the ship after Johnson’s turbulent three years in power,” per Reuters.

Truss said she was “delighted” with the results of the vote and that she would “hit the ground running” and “get things done.”

“I want to deliver for people,” Truss told the BBC. “I am entirely focused on a positive campaign.”

The final round of voting will be done via mail by the estimated 200,000 members of the Conservative Party across the Nation.

Johnson announced on July 7 that he would resign after being plagued by growing discontent among his party that culminated in a wave of resignation from top officials, including Sunak.

The Conservative Party’s final candidate vote coincided with Johnson’s final appearance before Parliament while in office. He closed his last address to the chamber by saying, “Hasta la vista, baby.” 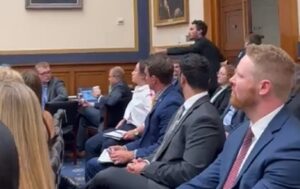