'I want to thank you, the British public, for the immense privilege you have given me,' Johnson said during his public address

The Prime Minister of the United Kingdom announced his resignation after three years in office.

In a speech in front of No.10 Downing Street, Boris Johnson said it was clear that the Conservative Party wanted new leadership.

The prime minister was unsuccessful in his attempt to persuade his colleagues in recent weeks that changing governments was unnecessary. Over 55 government officials resigned from the government in a 48-hour period leading up to Johnson’s announcement. They contend the prime minister is not fit to lead, citing a number of controversies that have marked Johnson’s time in office, per The New York Post.

“I regret not to have been successful in those arguments and of course, it is painful not to be able to see through so many ideas and projects myself,” Johnson said during his July 7 announcement.

Johnson took office in 2019 and was celebrated for his dedication to Brexit. The United Kingdom formally left the European Union under his leadership on Jan. 30, 2020.

Following the onset of the COVID-19 pandemic in March of 2020, Johnson’s government was criticized for its handling of the lockdowns and for throwing parties at Downing Street despite COVID-19 restrictions. The matter was investigated by London’s Metropolitan Police and Johnson was fined.

Members of the public were further outraged when Johnson appointed senior party official Chris Pincher to his government despite being aware of sexual misconduct allegations that had previously been made against the Conservative MP. Johnson apologized for appointing Pincher on July 5.

“As we have seen at Westminster, the herd instinct is powerful and when the herd moves, it moves and, my friends, in politics no one is remotely indispensable and our brilliant Darwinian system will produce another leader, equally committed to taking this country forward through tough times,” Johnson said.

“And to you, the British public, I know that there will be many people who are relieved and perhaps quite a few who will also be disappointed, and I want you to know how sad I am to be giving up the best job in the world,” he continued. “But them’s the breaks.”

“Above all, I want to thank you, the British public, for the immense privilege you have given me,” Johnson said. “And from now on until the new prime minister is in place, your interest will be served, and the government of the country will be carried on. Being prime minister is an education in itself.”

The Conservative Party is expected to announce a timeline for selecting Johnson’s replacement in the next week. Johnson will remain in office in a limited capacity until October unless his party establishes a new cabinet sooner. 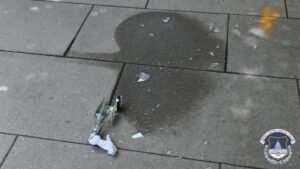