A Democrat and Republican from the House of Representatives have asked sports broadcasting network ESPN to end its business relationship with TikTok.

TikTok is a popular social media platform owned by Beijing-based ByteDance Ltd, which has formal ties to the Chinese Communist Party. Growing concerns about the company’s intrusive data collection policy have prompted 19 state governments to ban accessing or downloading TikTok on any government-owned or issued devices. Four more states have partial bans in place. The platform was also recently banned on devices owned or issued by the federal government.

Wisconsin Congressman Mike Gallagher, a Republican, and Illinois Congresswoman Raja Krishnamoorthi, a Democrat, sent a letter to ESPN expressing concern about the potential national security threat’s involvement with the company.

“ESPN’s decision to allow TikTok to sponsor halftime shows watched by millions of Americans raises serious questions about ESPN corporate decision-making and the risk analysis it conducts when soliciting sponsorships,” the lawmakers wrote on Jan. 9.

“No Chinese company is truly private, because under China’s 2017 National Intelligence Law, all citizens and businesses must assist in intelligence work, including sharing data,” Gallagher and Krishnamoorthi said. “Moreover, the company’s editor in chief, who is also the secretary of its internal CCP committee, stressed that the committee would ‘take the lead’ in ‘all product lines and business lines’ to ensure that ByteDance’s products have ‘correct political direction.’”

The lawmakers stressed that the app collects key personal data from its users, including tracking a device’s locations and accessing internet-browsing history. They also contend that, by manipulating TikTok’s algorithm, the CCP has “extraordinary power” and the ability to influence American society.

“TikTok’s algorithm and content moderation is a black box that the CCP could use to propagate videos that support party-friendly politicians or exacerbate discord in American society,” wrote the Representatives. “The Party can leverage enormous amounts of data to increase domestic division. Due to the rising number of Americans who use TikTok for news, the platform influences which issues Americans learn about, what information they consider accurate, and what conclusions they draw from world events.”

The representative noted that the platform has censored “politically sensitive topics” including the Chinese government’s treatment of the racial minority group Uyghurs, the CCP’s actions in Hong Kong, and the 1989 Tiananmen Square protests.

Gallagher and Krishnamoorthi have asked ESPN to explain its vetting process for potential corporate sensors if it considers possible risks to national security, if the company was aware of the CCP’s influence over TikTok, and if the company will commit to ending its commercial relationship with TikTok and “other Chinese companies determined by the U.S. government to pose national security threats.”

TikTok was the most downloaded app in 2021 with over 656 million downloads — holding the title for the third year in a row. The app was downloaded 94 million times in America during 2021, marking a 6% increase from 2020. TikTok is particularly popular with young Americans, with at least 37.3 million Gen Z users.

The bill would add Chinese technology company Huawei to a Department of Treasury list of companies American businesses are barred from working with because they are classified as foreign entities accused of espionage.

Gallagher and Krishnamoorthi also co-sponsored the Averting the National Threat of Internet Surveillance, Oppressive Censorship and Influence, and Algorithmic Learning by the Chinese Communist Party (ANTI-SOCIAL CCP) Act in December. The legislation would require President Joe Biden to use his powers under the Emergency Economic Powers Act to prohibit American companies from working with social media companies with more than 1 million users that are under the “substantial influence” of America’s adversaries.

In August, ESPN became the third brand in the world to reach 25 million followers on the platform. 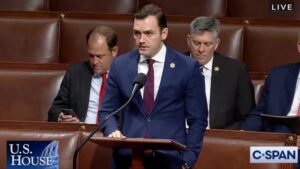