Republicans were joined by 146 Democrats in a sign of cooperation

The U.S. House of Representatives has voted overwhelmingly to pass a resolution creating a select committee to investigate the Chinese Communist Party’s (CCP) economic, technological, and security progress and its competition with the U.S.

Prior to the 2022 midterm elections, House Speaker Kevin McCarthy (R-Calif.) promised Republicans would create a committee on China if they regained control of the House. The resolution passed 365-65, with 146 Democrats supporting Republicans in the bipartisan effort.

“We spent decades passing policies that welcomed China into the global system. In return, China has exported oppression, aggression, and anti-Americanism. Today, the power of its military and economy are growing at the expense of freedom and democracy worldwide,” McCarthy said in remarks on the House floor.

He added that the key to bringing jobs back from China, securing intellectual property, and protecting America’s farmland is this new committee.

“I’ve heard my colleagues on both sides say that the threat posed by Communist China is serious. I fully agree,” he said. “This is an issue that transcends political parties. And creating the Select Committee on China is our best avenue for addressing it.”

The vote to form a China committee comes just a month-and-a-half after the U.S. Department of Defense (DoD) released an annual report, with military officials now warning of China’s determination to displace the U.S. as the world’s dominant superpower.

“The PRC has characterized its view of strategic competition in terms of a rivalry among powerful nation states, as well as a clash of opposing ideological systems. PRC leaders believe that structural changes in the international system and an increasingly confrontational United States are the root causes of intensifying strategic competition between the PRC and the United States,” DoD officials explain in the report’s executive summary.

Members on the China select committee will investigate a number of issues, including security threats and the role China may have played in the COVID-19 pandemic.

Rep. Mike Gallagher is expected to chair the committee and stressed the importance of the bipartisan nature of the investigations in remarks to the House floor.

“I stress working on a bipartisan basis,” he said. “The CCP does not pose a danger to just Republicans or Democrats — it seeks to harm all Americans. And we are going to counter this danger with a united front.” 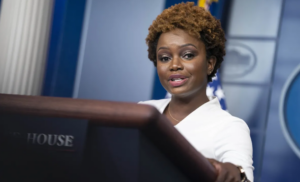 Karine Jean-Pierre Declines To Meet With Reporter In 2023