Trump and DeSantis Would Both Beat Biden in Nevada, According to New Poll

The KLAS TV-The Hill-Emerson College  poll of hypothetical match ups was released on Wednesday and found that when asked to choose between the Republican leaders and Biden, both DeSantis and Trump would win with 43 percent of the vote.

Just a third of Nevada voters (33 percent) said that they approve of the job President Biden is doing — while 57 percent disapprove.

“A demographic Biden is struggling with are Hispanic voters: in potential general election matchups Trump leads Biden 45% to 37% and DeSantis leads Biden 38% to 34% among [Hispanic] voters in Nevada,” Spencer Kimball, executive director of Emerson College Polling, said in a statement to The Hill.

Neither Trump or DeSantis have formally announced a 2024 run, though the former president has heavily implied that he intends to.

As Timcast previously reported, speculation about Gov. DeSantis making a bid for the White House has been gaining momentum after it was reported that he is holding a private fundraiser in Utah with Republican mega-donors.

DeSantis has said that he is focused on his 2022 gubernatorial reelection campaign, but has not ruled out campaigning for the presidency — even if Trump runs.

The Florida governor has been surging in popularity within the party for his bold moves in fighting the culture war in his state. From banning the discussion of sexual orientation and gender identities with young students, to prohibiting Critical Race Theory from being taught in the classroom — DeSantis has been making big waves and gaining a national fan base for his efforts.

In June, Trump said that he was confident he could beat DeSantis in a primary face off.

Speaking to the New Yorker, Trump said “I don’t know if Ron is running, and I don’t ask him.” He added, “It’s his prerogative. I think I would win.” He also took credit for DeSantis winning the Florida governor’s race because of his endorsement, telling the reporter, “If I didn’t endorse him, he wouldn’t have won.”

The former president is still the frontrunner in most hypothetical polls, but DeSantis has been on the rise. When Trump is not on the ballot, DeSantis takes a clear and decisive lead.

The KLAS TV-The Hill-Emerson College poll was conducted between July 7 and July 10 with 2,000 registered voters surveyed. It had a margin of error of 2.1 percentage points. 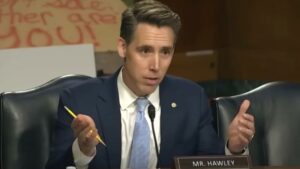