Speculation about Florida Governor Ron DeSantis making a bid for the White House in 2024 is gaining even more momentum after it was reported that he is planning a private fundraiser in Utah with Republican mega-donors.

DeSantis has said that he is focused on his 2022 gubernatorial reelection campaign, but has not ruled out campaigning for the presidency — even if former President Donald Trump runs.

CNBC reported on July 7 that “DeSantis is set to head to Utah the week of July 18 for the private gathering, according to people familiar with the matter. Many asked not to be identified because the campaign is trying to keep the private event from getting too much public attention.”

When asked about the event by the news outlet, DeSantis spokeswoman Lindsey Curnutte wouldn’t confirm any details, saying the campaign doesn’t “discuss private fundraising events with members of the press.”

“Though DeSantis is coming to Utah to raise money for his 2022 gubernatorial reelection campaign, fundraisers held in far-flung states like Utah, which is more than 2,000 miles from his home state, often suggest national aspirations,” CNBC noted.

The same day, Reuters ran a story titled, “Why a wave of social media ads may signal a potential DeSantis White House run.”

“A Reuters analysis of DeSantis’ social media ads shows he has dramatically expanded his out-of-state ads in recent months, an indicator, say some political analysts, that he may be laying the groundwork for a national campaign,” the outlet reported.

The analysts found that through the first three months of the year, DeSantis ads were heavily aimed at voters in Florida. However, that changed by the April-June period when the ads were spread evenly between his state and nationally.

“DeSantis’ increase in out-of-state ads suggests a move toward building a nationwide network of supporters, said three Republican strategists, including Ron Bonjean, who was an adviser to former president Trump’s 2016 presidential transition team,” the report noted.

DeSantis has been surging in popularity within the party for his bold moves in fighting the culture war in his state. From banning the discussion of sexual orientation and gender identities with young students, to prohibiting Critical Race Theory from being taught in the classroom, the governor has been making big moves and gaining a national fan base for his efforts.

In June, Trump said that he was confident he could beat DeSantis in a primary face off.

Speaking to the New Yorker, Trump said “I don’t know if Ron is running, and I don’t ask him.” He added, “It’s his prerogative. I think I would win.” He also took credit for DeSantis winning the Florida governor’s race because of his endorsement, telling the reporter, “If I didn’t endorse him, he wouldn’t have won.”

Neither of the two men have formally announced their plans to run for the presidency, but Trump has been heavily signaling his intent since leaving office.

In February, Trump stated that he intends to win a presidential election for a “third time,” during his speech at the Conservative Political Action Conference (CPAC).

The former president is still the frontrunner in most hypothetical polls, but DeSantis has been on the rise. When Trump is not on the ballot, DeSantis takes a clear and decisive lead.

On June 13, a week before the New Yorker article was published, DeSantis refused to confirm or rule out a presidential bid during an appearance on Fox News.

Fox & Friends co-host Ainsley Earhardt asked, “when will you announce or when will most candidates announce? Not until after midterms?”

DeSantis bested former President Donald Trump in a 2024 straw poll at the Western Conservative Summit, for the second time, in June.

In May, DeSantis beat Trump as the top pick for 2024 in a Wisconsin Republican Party straw poll. When presented with a hypothetical 2024 GOP field, nearly 38 percent of attendants backed DeSantis, while Trump came in second at 32 percent. None of the other possible candidates made it into the double digits. 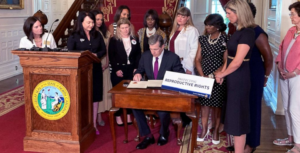