A judge has set a trial date for the man accused of opening fire on a New York City subway platform in a planned attack in April.

Frank James was charged with committing a terrorist attack on mass transit and discharging a firearm during a violent crime. The 10 victims shot during the attack, who all survived, were between the ages of 16 to 60. Another 19 people were injured.

Frank allegedly set off smoke bombs on a Manhattan-bound N train platform in Sunset Park before firing 33 rounds at commuters on the morning of April 12. New York City Police Commissioner Keechant Sewell said at a press conference after the attack the perpetrator had put on a gas mask before entering the smoke-filled platform.

The 62-year-old was then at large for roughly 24 hours after fleeing the scene by boarding another train with many people trying to escape the shooting. New York City residents were urged to contact the police with any information.

Police found a bank card and cellphone belonging to James at the scene of the shooting as well as the key to a van he has rented. A bag of smoke bombs, hobby fuse, a hatchet and gasoline were also recovered at the subway platform.

Investigators were also able to trace a 9mm Glock semiautomatic handgun they recovered to James. The gun jammed during the shooting.

James was taken into custody on April 13 after calling the police himself and alerting them to his whereabouts at a McDonald’s in the East Village.

His defense attorney, Mia Eisner-Grynberg, did not seek to have James released on bail during his arraignment.

“James had worked at a variety of manufacturing and other jobs, according to his videos,” according to WPTZ-Plattsburg-Burlington. “Police said he’d been arrested 12 times in New York and New Jersey between 1990 and 2007 on charges ranging from disorderly conduct to possession of burglary tools, but he has no felony convictions.”

James’s motive for the shooting is not known.

“In numerous rants he posted on YouTube, James, who is Black, made bigoted remarks about people of various backgrounds and railed against New York Mayor Eric Adams and complained about mental health care he received in the city years ago,” reports NBC New York.

He also discussed race on his now-deleted channel, saying in one video that black people and white people “should not have any contact with one another.” On other social media platforms, James shared ideologies from extremist black-identity groups including the Nation of Islam, the Black Panthers, and the Black Liberation Army.

During his appearance in Brooklyn federal court on July 25, James told U.S. District Judge William Kuntz that he was “not too good,” that he had been watching “a bit of baseball,” and that he has “read things in the press” that he was not happy about.

James is being held at the Metropolitan Detention Center in Brooklyn. 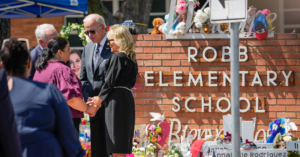