'They f—ing made me worse. They made me more dangerous than anybody could ever f—ing imagine.,' the suspect said in a YouTube video

UPDATE — Frank R. James, who is suspected of unleashing a gas canister and opening fire on morning commuters in Brooklyn on Tuesday, was arrested by NYPD officers in Manhattan’s East Village near St. Marks and First Avenue.

James was apprehended at 1:42 pm EST Wednesday as a result of a Crime Stoppers’ tip, Police Commissioner Keechant L. Sewell announced at a press conference.

“My fellow New Yorkers, we got him,” Mayor Eric Adams said via video at the time.

On Tuesday, the NYPD and New York City leadership held a Press Conference where they revealed the identity of their person of interest in the subway shooting.

The police said they had identified 63-year-old Frank R. James as the person they would like to question in connection with the incident that left 16 injured. Ten of the victims suffered gunshot wounds, and 5 of those were in critical condition.

Police noted that they found a Glock 17, 9mm handgun at the shooting scene, three high capacity magazines, 33 discharged shell casings, and a bottle containing what appears to be gasoline.

Police officials said they found Frank R. James’ credit card and a U-Haul key on the scene. Those two items led them to name James as the suspect in question.

This is Frank James who is a person of interest in this investigation. Any information can be directed to @NYPDTips at 800-577-TIPS. pic.twitter.com/yBpenmsX67

Police released two photos of James at the news conference Tuesday night, including one that appeared to be a screengrab from a YouTube video he had posted. NYPD Commissioner Keechant Sewell said that the suspect is a roughly 5-foot-5 black man with a heavy build at around 170 pounds.

After the announcement, it came to light that James had been making videos that included threats against the government and elected officials. The videos were posted to James’ YouTube channel under his username of “Prophet ofthruth88.” As of Wednesday morning, his channel had amassed about 3,000 subscribers.

The channel contains lengthy videos predicting a race war between black and white people. He also made threats and derogatory statements against black people, white people, Jewish people, and Mexicans. James made videos about the state of racial inequality and the need for black people to stand with strength against white supremacy.

In a video posted two days before Tuesday’s shooting, James said, “Let us not forget, I have been through a lot of sh— where I can say I wanted to kill people. I wanted to watch people die right in front of my f—ing face immediately.”

In another video, James ranted at the camera and claimed white people look at black people as enslaved people and should not mix.

“I tell the American Negro this, and I keep telling you the same thing, white people and black people, as we call ourselves, should not have any contact with each other,” he said.

James takes aim at New York City Mayor Eric Adams in yet another video entitled “Told You So.”

He also condemned the mayor for not doing more to combat homelessness.

“Eric Adams, Eric Adams: what are you doing, brother? What’s happening with this homeless situation? Every car I went to was loaded with homeless people. It was so bad I couldn’t even stand. I had to keep moving from car to car,” he said about the NYC subway.

James mentioned he was a mental health patient at New York Behavioral Health clinics and claimed that he left with more issues after going there for help.

As of Wednesday morning, James had not been located. Police have now offered a $50,000 reward for tips leading to James. 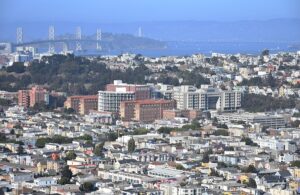