The man accused of opening fire in a subway station in Brooklyn made his first appearance in federal court.

Ten people were shot and injured after an attacker opened fire on the train car after releasing a smoke canister to disorient the crowd during morning rush hour. At least an additional dozen people were injured during the attack

“James was initially linked to the case when investigators found a key to a U-Haul van at the scene of the shooting and determined that the van had been rented by James,” reports CBS News. “The van was found Tuesday afternoon at a different location in Brooklyn.”

Investigators found a hatchet, fireworks, and gasoline in the van. They also found 9mm ammunition, a device that allows a silencer or suppresser to be attached to a pistol, targets and .223 caliber ammunition in a Philadelphia storage unit after locating a receipt for the unit on the Brooklyn platform.

James, 62, did not enter a plea during his appearance on April 14. He could be sentenced to life in prison if convicted of federal terrorism charges.

YouTube removed his channel, prophetoftruth88, the day after the attack. In his hundreds of videos, James denounced the United States.

“White people and black people, as we call ourselves, should not have any contact with each other,” James said in one of his videos.

In a different video, James bemoaned the fact that Ketanji Brown Jackson, the nation’s newest Supreme Court Justice, is married to a white man.

“You hear black people [inspired by Jackson] say my daughter … dreaming to be a part of something that does not want you be a part of it … You’re not white, you’re not European … You want to force yourself on these people and they’re going to kill you,” he said.

On April 11, James uploaded a video to his channel stating he wanted to watch people die.

James was at large for more than 24 hours after the attack leading to a large-scale manhunt before he was apprehended by law enforcement.

In a memo to U.S. Magistrate Judge Roanne Mann, the U.S. Attorney’s Office for the Eastern District of New York said James presented “a severe and ongoing danger to the community” and “a serious flight risk.”

The memo also stated that law enforcement had recovered a number of weapons stockpiled in several locations during their investigation.

“For these reasons, including the legal presumption that there is no set of conditions that will reasonably assure the defendant’s appearance or the safety of the community, the government respectfully submits that the Court should enter a permanent order of detention pending trial,” the memo stated.

In addition to ordering that he be remanded into police custody without bail, the judge ordered that James be provided psychiatric attention by the Federal Bureau of Prisons. 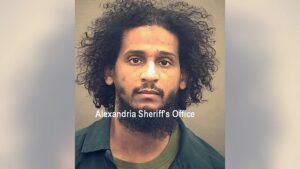 British ISIS Militant Convicted of Killing Four Americans, Three of Whom Were Beheaded