In a nearly hour-long interview posted to YouTube, the rapper talked about the mass casualty event and the fallout with Charlamagne tha God.

Hundreds of people were injured and 10 people died after the 50,000 person crowd pushed toward the stage on Nov. 5. Scott, who created the event, was performing during the chaos. He has been criticized for not stopping the show even as the crowd chanted to get his attention.

“It’s so crazy because I’m that artist too — anytime you can hear something like that, you want to stop the show,” he said. “You want to make sure fans get the proper attention they need.”

“I just really go off the fans’ energy,” he added. “You can only help with what you can see, you know?”

He denied hearing any of the crowd’s cries for help and did not know about the extent of the chaos until after the show. He said his views from the stage in addition to the smoke and pyrotechnics made it difficult to see the crowd.

Scott has been charged on two other occasions for encouraging his fans to taunt security and rush the stage, behavior Charlamagne described as “raging” during their interview.

In 2015 and 2017, “he pleaded guilty to charges stemming from directives he gave his crowds at two separate shows,” per Fox News.

He said he sat down for the interview with Charlamagne because he “needed a way to kind of like communicate” and that he has wanted to find a way to explain how he has been feeling.

“There are families that are grieving. Fans experienced something, fans that came to the show. … I’ve always been that person to see things through with people that shared experiences with me,” Scott said.

He addressed the media coverage of the event and of his behavior, attributing the furor to his public status.

“I’m the face of the festival,” the musician said. “I’m the artist. So yeah, the media wants to put it on me.”

Scott discussed the setup of the festival throughout the video, often indicating that professionals from the industry had been involved and relied upon to ensure the event went smoothly.

“We trusted the professionals that people be taken care of and, you know, leaving safely,” he said.

Charlemagne asked the rapper if he felt responsible for the mass casualty event.

The disaster at Astroworld has been called one of the deadliest live-music crowd events in national history. Scott, Live Nation, Apple Music, Drake and others involved with the event are facing hundreds of lawsuits, including a mass litigation suit from more than 1,500 attendees.

Scott has denied legal responsibility for the dangerous conditions and tragic outcome of Astroworld. This week, he requested a cluster of lawsuits dismissed.

Legal experts said the interview could have negative consequences for the rapper. Although he never said the phrase “I’m sorry” during the video, any admission of guilt could be used in legal proceedings against him.

Attorney Danny Cevallos told NBC New York that giving an interview “is always risky” and is “generally not a good idea … especially if you have a client who may not acquit himself very well.” 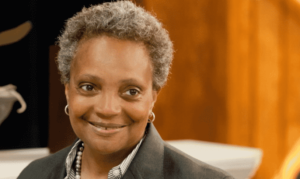