Warning comes after weeks of violence throughout Multiple Mexican cities

The United States Department of State has issued a travel advisory for Mexico citing increased risk of “crime and kidnapping.”

The bulletin lists 32 states travelers should avoid, and comes on the heels of a wave of arson and murder carried out by cartels and gangs in cities along the U.S. Mexican border.

“Violent crime – such as homicide, kidnapping, carjacking, and robbery – is widespread and common in Mexico,” State Department officials warn. “The U.S. government has limited ability to provide emergency services to U.S. citizens in many areas of Mexico, as travel by U.S. government employees to certain areas is prohibited or restricted. In many states, local emergency services are limited outside the state capital or major cities.”

Last week, three people were shot dead and 20 injured after a prison riot spilled onto the streets of Juarez, which is located just a few miles south of El Paso, Texas.

Similar attacks occurred across multiple states in a week-long spree of violence that resulted in Mexican officials deploying soldiers and National Guard troops.

“I think that the orders that were given to these gunmen was to cause chaos,” said Mexican security analyst Alejandro Hope. “Generate chaos, generate uncertainty, generate fear, shoot at anything that moves. That is something that generates terror.”

In their travel advisory, U.S. officials call Tijuana an area of “particular concern” citing the recent high number of homicides. The bulletin states that most homicides in the area seem to be targeted, but the violence can result in innocent bystanders being killed.

The State Department is warning travelers that transnational criminal organizations compete in the border area to “establish narco-trafficking and human smuggling routes.” Officials say that travelers should stay on main highways and avoid remote locations.

U.S. officials list a number of steps travelers can take to remain safe, including: 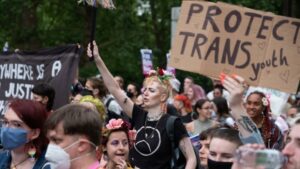