Should Biden Be Held to the Same Standard He Used to Criticize Trump on COVID-19?

During an interview with ABC News host David Muir, Democrat President Joe Biden laughed when asked how he got the pandemic forecasts “wrong” and admitted that he does not know if the United States will ever overcome COVID-19.

Biden laughed and claimed that “nobody saw it coming, nobody in the whole world.”

Muir also said to Biden, “Let me ask you about what you said on July 4th. I know you remember it well. You told the American people: ‘we’re closer than ever to our independence from a deadly virus.’”

“Do you think you overpromised?” Muir asked.

“No, we were closer than ever,” Biden replied. “But there’s a lot we don’t know. It’s like I’m sure you’re going to ask me ‘when’s this going to end? How are we going to do this? Are we certain going to be able to overcome?’ The Delta… excuse me the virus… COVID-19.”

Biden went on to say “we don’t know, we don’t know for certain” if the United States will move on from the pandemic.

Biden’s comments appear to be a result of the “stark shift in messaging” his advisers have reportedly been pushing for amid a surging disapproval rating on his handling of the pandemic and the emergence of the new Omicron variant.

In congruence with the new messaging from the White House, Biden recently admitted that there is “no federal solution” to COVID-19 and that “this gets solved at the state level.” Yet during his 2020 presidential campaign, Biden released his COVID-19 plan that explained how he would handle the pandemic, saying, “The federal government must act swiftly and aggressively.”

The Biden administration has certainly followed that approach, directing the Education Department to use “all available tools” to combat the decisions of “Governors and other State and local officials,” like restrictions placed on masks mandates in schools.

The Biden administration additionally issued a vaccine mandate for businesses with 100 or more employees, and then directed businesses to implement the mandate despite a court ordered pause.

Shortly before directing businesses to ignore the court’s pause on the vaccine mandate, the Biden administration reissued a nationwide eviction moratorium that had been ruled unconstitutional.

While Biden went on to fulfill his promise of a federal government that acts “swiftly and aggressively,” he failed on his promise to “shut down the virus” if elected.

More Americans have now died from COVID-19 during President Biden’s administration than under former President Trump, and the United States is set to face its biggest wave of COVID-19 yet as the new Omicron variant rapidly spreads.

According to researchers at the Institute for Health Metrics and Evaluation at the University of Washington’s School of Medicine (IHME), the U.S. could see about 140 million new infections from Jan. 1 to Mar. 1, 2022. As IHME director Dr. Chris Murray told USA Today, “Total infections in the U.S. we forecast are going from about 40% of the U.S. having been infected so far, to having in the next 2 to 3 months, 60% of the U.S. getting infected with omicron.”

During Biden’s speech at the Democratic National Convention in August 2020, he explained his metric on determining how the president should be judged for their handling of the COVID-19 pandemic. Biden said to “just judge this president on the facts,” and then listed the total deaths and case numbers at that time under then-President Trump.

During an NBC Town Hall in October 2020, Biden blamed Trump for the deaths of Americans from COVID-19 and said that Trump should be held accountable: “More than 200,000 Americans have died. 50,000 Americans are getting the virus every day. 1,000 a day are dying. This is a national emergency. … The President should take responsibility.”

Using Biden’s argument that the president is responsible for the deaths of the virus, it is important to remember the standard he set when there were about 220,000 COVID-19 deaths in the United States.

“Anyone who is responsible for that many deaths should not remain as President of the United States of America,” Biden stated during an October 2020 debate with Trump.

Under Biden, nearly double “that many deaths” from COVID-19 have occurred, as of December 28th, 2021. 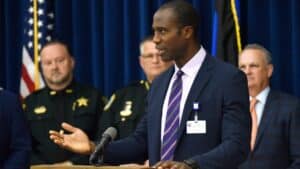