Dr. Joseph Ladapo sent a letter to the administration criticizing the pause of monoclonal antibody treatments

The letter was addressed to Secretary of Health and Human Services Xavier Becerra and detailed Ladapo’s concerns with the administration’s recent actions.

Regeneron and Eli Lilly manufacture the currently paused treatments amid claims that such treatments are not effective against the omicron variant of the coronavirus.

The federal government has continued to supply Sotrovimab from the company GlaxoSmithKline, which reportedly works against omicron.

Ladapo shared the successful milestone of treating 100,000 patients successfully with the monoclonal antibody treatments in the letter. He went on to say they “had no advanced warning” of the pause, which would ultimately disrupt the successful treatment of COVID patients.

Ladapo referenced comments from President Biden on Monday that there wasn’t a solution by the federal government to end the COVID pandemic.

Feds paused Regeneron bc it may not work against Omicron. FL says it can still be used in existing Delta cases. pic.twitter.com/9mmw5SsuZJ

“There is no federal solution. This gets solved at the state level,” Biden said at the time in response to Arkansas Republican Gov. Asa Hutchinson warning the president against letting “federal solutions stand in the way of state solutions.”

In September, Governor Ron DeSantis chided the Biden administration for the pause and changes in the distribution of the monoclonal antibody treatments, calling for the federal government to restore distribution.

The Department of Health and Human Services caused concern in many states after announcing that the agency would change how the monoclonal antibody treatments would be distributed. 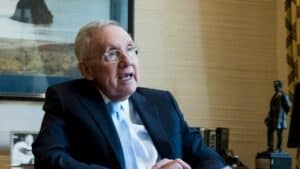