However, Spotify is facing increasing pressure to censor the popular podcast over Rogan’s willingness to speak to guests with different perspectives about the pandemic. Though the company has said they will not pull the plug on the podcast, they have removed approximately 70 episodes from their library in recent days.

Launched in 2013, Rumble runs its own infrastructure — so the company says it is “immune to cancel culture.”

Rumble went public through a deal with CF Acquisition Corp. VI with an initial enterprise value of $2.1 billion in December.

In a letter to Rogan tweeted by the company, CEO Chris Pavlovski urged Rogan to join Rumble.

Hey @joerogan, we are ready to fight alongside you. See the note from our CEO @chrispavlovski… pic.twitter.com/G7ahfNNjtP

Pavlovski wrote, “We stand with you, your guests, and your legion of fans in desire for real conversation. So we’d like to offer you 100 million reasons to make the world a better place.”

“How about you bring all your shows to Rumble, both old and new, with no censorship, for 100 million bucks over four years?” Pavlovski continued.

The letter concluded, “this is our chance to save the world. And yes, this is totally legit.”

Though episodes are being removed, Spotify CEO Daniel Ek has defended keeping Rogan on the platform.

Ek told upset employees last week that the solution is not to get rid of Rogan’s podcast, but perhaps to obtain more exclusive content from different perspectives.

He pointed out that there have been episodes of the podcast that did not make it onto the platform because they violated the rules.

Rogan recently posted a video on his Instagram account addressing the controversy. He promised to include a more balanced view of the coronavirus and the vaccines, encouraging all sides of the issue to be explored. 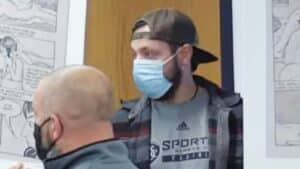