Audio of the meeting was obtained by The Verge and featured Ek telling employees that “there will be opinions, ideas, and beliefs that we disagree with strongly and even makes us angry or sad,” but that Rogan isn’t going anywhere.

“The debate around the conversations Joe Rogan has on his show about such issues, such as Covid-19, climate change, gender, race, has intensified and brought to light many questions around our role and responsibilities as a platform,” Ek said. “And based on your own lived experiences and the way you may see this impacting your fellow colleagues and communities, I know some of you feel disappointed, or angry, or even hurt, by some of this content and the fact that it remains on our platform.”

Multiple musicians including Neil Young and Joni Mitchell have had their songs pulled from the platform in protest of Rogan not being censored.

Rogan has an exclusive deal with the platform.

The Verge report cited an anonymous employee telling them that people at the company are “upset” by the lack of censorship.

“Everyone’s a little upset, especially the people whose initiatives directly contradict what’s happening,” said the employee “People are feeling increasingly frustrated that no matter what the company says messaging-wise, or no matter what people’s initiatives are, it all kind of ladders up to, ‘What’s the best for Joe Rogan and Joe Rogan’s audience?'”

During a question and answer portion of the company meeting, employees pushed back on the lack of censorship, asking about things like “how employees’ work to advance diversity within the company can reckon with some Rogan comments.”

Ek told the employees that the solution is not to get rid of Rogan’s podcast, but perhaps to obtain more exclusive content from different perspectives.

He pointed out that there have been episodes of the podcast that did not make it on to the platform because they violated the rules.

The CEO concluded by saying, “I think ultimately, this really comes down to two things. First, do we believe in our mission: 50 million creators and 1 billion users? And finally, are we willing to consistently enforce our policies on even the loudest and most popular voices on the platform? And I’m telling you, I believe both.”

Rogan recently posted a video on his Instagram account addressing the controversy. He promised to include a more balanced view of the coronavirus and the vaccines, encouraging all sides of the issue to be explored. 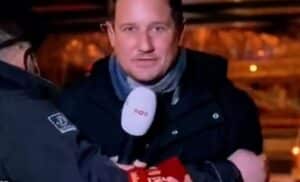