Thirty-three Republican members of Congress introduced a bill called Stop the Sexualization of Children Act of 2022.

The bill would “prohibit the use of federal funds to develop, implement, facilitate, or fund any sexually-oriented program, event, or literature for children under ten,” according to a draft of the legislation that Republicans are calling the Stop the Sexualization of Children Act of 2022.

“The Democrat Party and their cultural allies are on a misguided crusade to immerse young children in sexual imagery and radical gender ideology,” House Republican Conference Vice Chairman Mike Johnson said. “This commonsense bill is straightforward. No federal tax dollars should go to any federal, state, or local government agencies, or private organizations that intentionally expose children under 10 years of age to sexually explicit material.”

Lawmakers highlighted a number of current events that inspired the legislation, noting that Planned Parenthood has launched a campaign to encourage legislatures and school boards to implement a sexual education program that teaches concepts of gender fluidity to children under ten. They also pointed to an event last June that was funded via the Department of Health and Human Services in Alaska where families were encouraged to take their children to a drag queen performance in exchange for a $50 gift card.

Members of the GOP have also been critical of drag queen performances that have taken place on military bases for the families of service members, as Timcast previously reported.

Parents who discover that public or private entities have used federal funds for the purpose of exposing children to sexual material — described as any depiction or description of a sexual act but also includes discussions about gender identity — will be entitled to file a lawsuit against the institution, if the bill passes.

Repeat offenders who are caught violating provisions of the bill more than once during a five-year period will lose access to federal funding for the next three years.

The bill is not expected to pass in the current Democrat-controlled House. 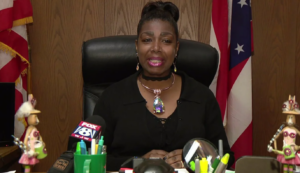