'If Alex Jones Pays For Lying Shouldn't Every Celebrity Pushing Vaccines Pay Too?'

On Thursday, British rapper Mathangi Arulpragasam, who uses the stage name M.I.A., said a nuclear war could wipe out the human race — perhaps as a result people who lack critical thinking skills.

The rapper, who frequently discusses politics and culture on social media, commented on Alex Jones’ Wednesday verdict in which the Infowars host was ordered to pay almost $1 billion in the Sandy Hook defamation case.

“Alex jones lying and Pfizer lying both trending,” said M.I.A. in a Wednesday tweet following the verdict. “One with penalty other without. If you have no critical thinking faculty, this is about as crazy as we should get before a nuclear war wipe out the human race.”

Alex jones lying and Pfizer lying both trending . One with penalty other without. If you have no critical thinking faculty, this is about as crazy as we should get before a nuclear war wipe out the human race. pic.twitter.com/li0yz5qHvj

The rapper appeared to be referencing the Russian invasion of Ukraine as rhetoric from world leaders has heightened nuclear war fears.

“Its 2022, so far no one has ever paid a billion dollars for lying or being in denial on this planet,” M.I.A. said in an apparent criticism of the verdict early Thursday morning.

iTS 2022 , so far no one has ever paid a billion dollars for lying or being in denial on this planet .

More than a dozen members of the victims’ families alleged they were harassed and received death threats following Jones’ suggestion that the shooting was staged. Jones’ companies Infowars and Free Speech Systems filed for bankruptcy protection earlier this year. The verdict only includes compensatory damages and are speculated to increase after punitive damages are awarded.

“If Alex Jones pays for lying shouldn’t every celebrity pushing vaccines pay too?” the rapper had previously posted.

If Alex jones pays for lying shouldn’t every celebrity pushing vaccines pay too ?

During a testimony to European Parliament on Oct. 10, a Pfizer executive revealed the company did not know if it would prevent transmission of COVID-19 prior to releasing the vaccine. The admission appeared to contradict previous statements and campaigns from celebrities encouraging people to seek vaccination, including Hugh Jackman who said “Wolverine’s healing ability can’t save me from Covid. But the vaccine can. Get it!”

You know, the science tells us that these vaccines are safe and effective at preventing COVID infection and serious illness. They are the best weapon we have — along with mask-wearing, social distancing, hand-washing, and other measures recommended by the CDC and public health officials — to combat the deadly pandemic that has been ravaging our country and our communities for the past year. And if enough people get the vaccine, they have the potential to help end this once and for all.

President Joe Biden famously claimed during a CNN town hall in July 2021, “You’re not going to get COVID if you have these vaccinations.”

The rapper noted other high-profile instances of alleged lies from public and media figures that had not received the same investigation as Jones’s Sandy Hook comments.

“I want to speak with a lawyer and defamation expert on the gaslighting of Tamil peoples death toll 2009. Every media outlet lied and pushed the same narrative when it was proof war crimes were committed. 100 000 families are denied the right to grieve and be counted,” said M.I.A., who went on to point out former George W. Bush’s weapons of mass destruction claim which some have criticized to be the catalyst for launching the 2003 invasion of Iraq. The rapper also tweeted out “2008 financial crisis” — an apparent reference to a lack of criminal investigation into wall street and the banking industry.

Fears of nuclear war were stoked after Russian President Vladimir Putin signed treaties to annex four Ukrainian regions currently occupied by troops declaring Russia intended to protect them as their own and would never relinquish control over the areas. Ukrainian President Volodymyr Zelenskyy appeared to respond to Putin by calling for the North Atlantic Treaty Organization (NATO) to preemptively strike Russia to prevent the country from deploying nuclear weapons last Thursday.

The United States Department of Health and Human Services (HHS) also announced earlier in the month they had purchased a $290 million supply of emergency nuclear radiation drug Nplate.

Last Friday, President Biden commented on heightened nuclear rhetoric, saying, “We have not faced the prospect of Armageddon since Kennedy and the Cuban Missile Crisis.” 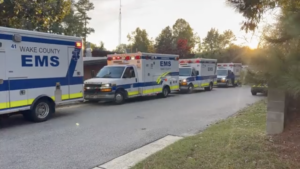