The court is still weighing punitive damages, which could add millions more

A Connecticut court has ordered Alex Jones to pay $965 million to families of victims of the Sandy Hook Elementary school shooting massacre.

The nearly one-billion-dollar verdict only includes compensatory damages and could increase after punitive damages are awarded.

More than a dozen people sued Jones, saying they were harassed and received threats following the Infowars host’s public statements suggesting that the 2012 school shooting never happened and that the victims were crisis actors.

Jones was ordered to pay damages of $120 million to Robbie Parker, the father of six-year-old victim Emilie Parker, and more than $50 million each to several other parents, according to Forbes.

Parker said during the trial that the harassment his family faced has not stopped since the incident.

“That really threw me off,” Parker testified. “I was looking for something to keep me stable because my compass was spinning, I didn’t know which way was what, and seeing these comments broke that connection I had, that stability.”

This lawsuit comes just two months after a separate jury awarded the parents of other victims nearly $50 million. A judge in that case is scheduled to hear arguments as to whether a Texas law capping the amount a jury awards applies to the case.

“He’s going on 10 years of defaming these families, and it’s not stopping,” Christopher Mattei, a lawyer for the families, told the jury in his closing arguments. “This is their one chance, and your one chance … to render a verdict on just how much devastation Alex Jones has caused.”

Earlier this year, Jones’s companies filed for bankruptcy protection and a witness hired by the plaintiff estimated that Jones and his companies were worth as much as $270 million.

Jones is still facing a third trial in Texas, which is expected to begin toward the end of this year. 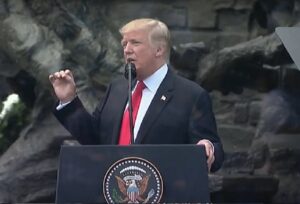 Only Donald Trump Can End the War in Ukraine: Viktor Orbán