Members of the House Freedom Caucus are urging all Republicans to oppose passage of the FY 2023 National Defense Authorization Act (NDAA) until President Joe Biden’s vaccine mandate is repealed.

“On September 18, 2022, President Biden admitted ‘the pandemic is over,’” the caucus wrote in a letter to House and Senate minority leaders. “Yet, the President and his ‘woke’ Pentagon continue to force an experimental and largely ineffective vaccine onto American’s military personnel, and thousands of our best and bravest service members face involuntary discharges for refusing on religious or medical grounds — and the Department of Defense Inspector General has raised serious concerns regarding the wholesale dental of vaccine mandate exemption requests.”

The letter was dated just one day after a Pfizer executive gave testimony to a European Parliament committee admitting that prior to the pharmaceutical giant releasing their mRNA vaccine, the company did not know if it would prevent transmission of COVID-19.

It also follows a recent Pentagon Inspector General report showing the military has had a possibly illegal blanket policy in denying vaccine exemption requests for personnel.

More than 100,000 active duty servicemembers currently face discharge from the U.S. military over refusal to take the vaccine.

In addition to repealing the vaccine mandate, members also urged their Republican colleagues to purge the military of “woke” ideologies, halt spending on climate projects, and establish a Special Inspector General to oversee and investigate U.S. involvement in the Russia-Ukraine war.

The Freedom Caucus also says Republicans must delay passage of the NDAA until the beginning of the new congressional session in January 2023 to allow voters to have a voice on the legislation. 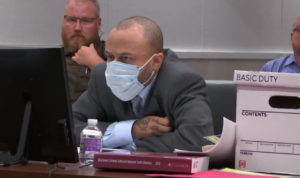