The British influencer previously said he was a Korean woman

A social media content creator who previously identified as both transgender and transracial is now embracing his British nationality.

Oli London announced in early 2022 that he was transitioning to live life as a Korean woman. London, who lived in South Korea for several years, underwent 32 surgeries to achieve his desired look.

Then, in October, London announced he was no longer transgender and regarded himself as male. He said his gender transition only brought him “temporary happiness” and that he would be “living as a Korean man again” in an explanation video posted on his YouTube channel.

“This actually kind of saved my life,” London told Catholic News Agency. “It’s brought me back to who I am as a person, finding God.”

He said his faith helped him accept himself “as God made him” – a British man — after he began attending a Catholic Church in August.

He told the outlet, “It made me [realize]: ‘You know what, God made me a certain way, God made me who I am. Why on earth would I want to change that? Why am I going for all these extreme procedures? This is not how God made me, this is not what I was meant to be in life.”

During an appearance on Tucker Carlson Tonight, London said it was no wonder that so many young people are struggling with their gender identity.

“Children are taught from a young age – from the age of five in some cases – that its ok to change their gender, its ok to… wear a skirt, it’s ok for a boy to use a gender-neutral toilet when it puts girls at risk,” London said. “This is the new norm. And schools are teaching about toxic masculinity. They are eroding the alpha male. The alpha straight male is being eroded”

The 32-year-old said children are being encouraged to idolize “weak men” like pop singer Harry Styles and Democrat Beto O’Rouke. 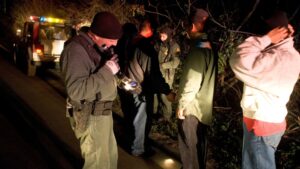