A new bill introduced in Texas urges Congress to investigate if a leak from a Wuhan laboratory sparked the pandemic.

The bill was introduced by Republican Texas State Rep. Briscoe Cain and calls on the “federal government to conduct an unbiased and comprehensive investigation of the origins of the SARS-CoV-2 virus.”

“The citizens of the State of Texas have the right to know if wasteful government spending on taxpayer-funded experiments on bats and humanized mice caused the death of over 1 million Americans and over 6.6 million people worldwide,” the text of the bill reads in part.

The bill also notes that “the U.S. National Institutes of Health has confirmed that, between 2014 and 2019, it sent approximately $600,000 of taxpayers’ money to the Wuhan Institute of Virology to collect coronaviruses from wild bats and manipulate them in animal experiments.”

“The National Institutes of Health has confirmed that it funded gain-of-function animal experiments at the Wuhan Institute of Virology that engineered bat coronaviruses to be as much as 10,000 times stronger than their natural counterparts,” the bill continues.

A U.S. Senate Committee on Health Education, Labor and Pensions report determined “the emergence of SARS-CoV-2 that resulted in the COVID-19 pandemic was most likely the result of a research-related incident,” which is also noted in the proposed legislation.

Rep. Cain’s bill has been endorsed by the taxpayer-watchdog White Coat Waste Project.

“Taxpayers in Texas and beyond are rising up and demanding to know whether white coats in Wuhan wasted our hard-earned money on reckless animal experiments that sparked a devastating pandemic,” Tristan Daedalus, the Government Affairs Director at White Coat Waste Project said in a statement provided to Timcast.4

White Coat Waste’s aim, according to their website, is to “STOP taxpayer-funded experiments on dogs, monkeys, cats and other animals, we must stop wasteful government spending. Our approach? Drain the swamp: cut federal spending that hurts animals and Americans.”

“As the first organization to expose and cut taxpayer funding for the Wuhan animal lab, we applaud Rep. Briscoe Cain for demanding that the feds finally investigate if a lab leak caused COVID, as Congress, the FBI, a majority of Democrat and Republican taxpayers, and experts around the world believe happened. Stop the money. Stop the madness!” Daedalus continued. 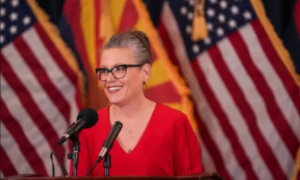