Taxpayer Watchdog White Coat Waste says that they have cut down the abuse of primates by the Food and Drug Administration by a massive 44 percent.

The organization has now filed a lawsuit against the agency for not responding to a Freedom of Information Act request, which they believe to be crucial in helping that number drop even lower.

“In January 2022, using FOIA, we requested information about all of FDA’s ongoing in-house experiments on hundreds of primates. They said they would give us documents by May 1…then ignored their own deadline. On May 31, they said they would get us the documents soon. But did they? Nope,” the organization said in a statement about the lawsu.

So, at the end of August, WCW filed a lawsuit to obtain them.

“Taxpayers have a right to know how our hard-earned money is being wasted by FDA white coats on cruel government primate labs, Desiree Bender, campaign manager at White Coat Waste Project said in a statement to Timcast.

“Using the Freedom of Information Act (FOIA), we previously exposed and shut down the FDA’s $5.5 million nicotine addiction experiments on monkeys and secured retirement for the abused survivors at a sanctuary. Following that historic victory, and our subsequent bipartisan work with Congress, we’ve slashed FDA’s primate abuse by a remarkable 44% percent,” the statement continued. “Our new lawsuit will help push it to the 100% goal line. To stop taxpayer-funded monkey testing, you must first stop wasteful government spending. That’s why we’re proud to be the only group to have actually closed primate labs in over half a decade. The strategy is effective: Stop the money. Stop the madness!”

While the organization has had major wins in recent years, the US government, specifically the National Institutes of Health, is buying up monkeys for animal testing in record numbers to offset an ongoing shortage of these animals after so many were used in experiments testing COVID-19 vaccines.

“To make room for more monkeys, the US National Institutes of Health (NIH) has invested about US$29 million over the past two years in refurbishing housing, building outdoor enclosures and making other infrastructure improvements at the US National Primate Research Centers (NPRCs), which it funds. The agency is expecting to spend another $7.5 million or so by October. And US President Joe Biden’s administration has proposed investing even more: citing the pandemic, it suggests a 27% increase in funding for the NPRCs in its budget request for fiscal year 2022. If approved by Congress, that would add $30 million for the centres,” Nature.com reported last year.

The NIH is making excuses for purchasing the primates by saying that they need to be prepared in case there is another pandemic three years from now.

“We have been making investments to bring the levels up and to plan for the future,” James Anderson, director of the NIH Division of Program Coordination, Planning, and Strategic Initiatives in Bethesda, Maryland told Nature.com. “What happens if [a pandemic] happens again, with another virus in three years? We want to be ready for that.”

Though animal testing, specifically on primates, is up — not a single federal primate lab was closed by an establishment animal rights group during either the Trump or Biden administrations. White Coat Waste, which focuses on taxpayer spending, closed down three.

A WCW campaign that began in late 2016 ended the FDA’s $5.5 million baby monkey nicotine addiction labs and led to all the monkeys being retired to a primate sanctuary. They additionally prompted the FDA to create a first-ever retirement policy for all lab experimentation survivors.

Following WCW’s success at shutting down the FDA’s nicotine addiction tests on monkeys, they worked with Congress to include historic language in annual FDA spending bills, including this year’s, directing the agency to reduce its use of primates in experiments and retire the survivors to sanctuaries.

Federal reports show that since WCW’s campaign began, the FDA has cut its use of primates in experiments by a staggering 44%.

In 2021, a WCW campaign ended the Department of Veterans Affair’s angel dust experiments on monkeys.

Using the Freedom of Information Act, the organization’s investigators exposed tests that involved drilling holes into monkeys’ skulls and injecting them with drugs, including the hallucinogenic street drug PCP, to damage their brains. The experimenters then forced the monkeys to watch or point to objects on a screen to measure the extent of the brain damage. Since the monkeys were not cooperative with the brutality, the experimenters would screw posts in their heads to forcibly immobilize them during experimental trials.

The organization also exposed and subsequently ended the VA’S $9 million monkey crippling experiments, in which they severed the spines of “calm [and] easy to handle” vervet monkeys, then forced them to perform dexterity tests in exchange for food.

Congress subsequently enacted WCW-backed legislation to phase out the VA’s experiments on primates, dogs, and cats by 2025. The FDA has also made cutting animal testing an agency priority.

White Coat Waste’s efforts have been successful by focusing on the taxpayer cost of these often painful experiments.

Massive establishment animal rights organizations, such as People for the Ethical Treatment of Animals, raise millions by claiming to be saving these animals — but have entirely dropped the ball while lining their pockets.

As Timcast previously reported, PETA has been raising money on promises of stopping cruel laboratory testing conducted on primates for ages, even though they haven’t had a win in that area for seven years.

When you sign any primate-testing-related petition on the PETA website or use their form to send a letter complaining to a relevant party, the organization immediately prompts you to give them money on the seemingly false premise that donating will help end the practice.

However, PETA’s last win regarding tests on primates was all the way back in 2015, when an expose on the National Institutes of Health ended more than 50 years of infant-monkey maternal-separation studies.

For more information on White Coat Waste and its efforts, you can visit its website here. 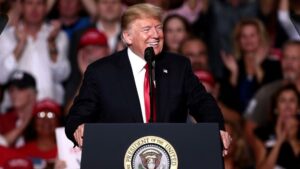 Trump Says Being Indicted Would Not Stop Him From Running Again